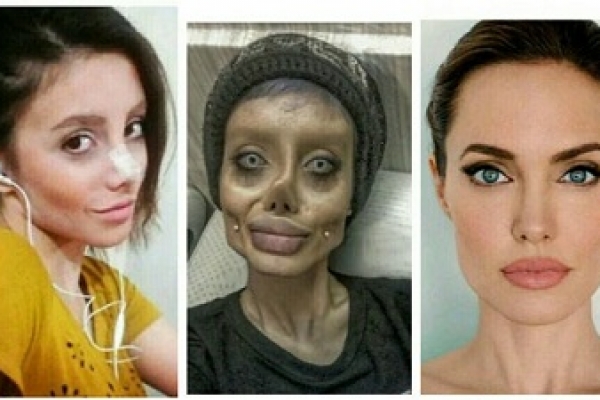 An Angelina Jolie super-fan has amazed her own social media followers with photos that show her trying to emulate the Hollywood star.

Sahar Tabar, 22, from Tehran, Iran, has an Instagram account filled with snaps that show her with Angelina-esque razor-sharp cheekbones and famously plump pout, albeit much more extreme versions.

Belgian media has reported that Sahar has undergone 50 procedures to look like her idol - but fans claim she creates the incredible looks just by using make-up and clever prosthetics.

However not all of the feedback from her 318,000 Instagram followers is positive, with some likening her to a 'zombie' or a 'corpse'.

Belgian website Sud Info, Sahar said her goal in life is to look like the Hollywood actress.

It reported that she has lost 40kg and undergone dozens of procedures in the space of just a few months to look like Angelina.

She has shared numerous selfies on social media, all of which have sparked huge debate among her Instagram followers.

Sahar's followers have posted to say she looks like a 'zombie' and said her pictures make them 'feel sick'.

However it is believed the social media star has actually created her distinctive look with the help of prosthetics and make-up.

In one video she can be seen without her unique nose and cheek bones, though this may be a clip from before her transformation