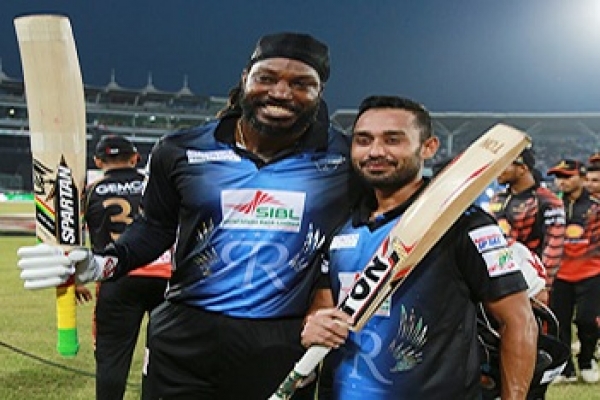 A blistering century from Chris Gayle powered Rangpur Riders to a comfortable 8-wicket win against Khulna Titans in the Eliminator match of Bangladesh Premier League (BPL) 2017 on Friday.

The West Indian smashed almost 75% of his team's runs as Rangpur Riders secured their spot in the second qualifier in BPL 2017.

It was the first century in this season's BPL so far and the fourth century by the explosive opener Gayle in the BPL tournament.

The big hitting batsman Gayle who took only 45-ball to complete the century, smashed 14 massive sixes and six fours. During the process, he shared an unbeaten 146-run second wicket stand with Mohammad Mithun who provided an ample support to chase the total.

After this emphatic win over the Titans Rangpur will face either Dhaka Dynamites or Comilla Victorians in the Second Qualifier.

But it was Carlos Brathwaite’s unbeaten knock of 25 and Nicholas Pooran’s 28 gave Khulna a fighting total of 167 for 6 after 20 overs. Lasith Malinga picked up 2 wickets for 49.

Chasing 168, Rangpur Riders were in trouble after losing 2 wickets for 25. Then it was all about Chris Gayle show who scored an unbeaten 126 off just 51 balls and guided Rangpur to a compressive victory with 8 wickets and 26 balls remaining. Mohammad Mithun was not out on 30. Jofra Archer bagged 2 wickets for 30.