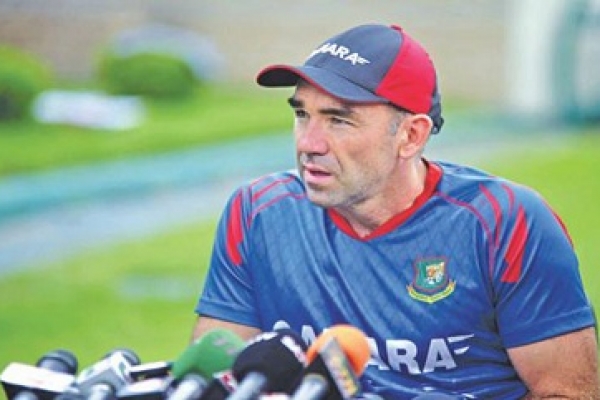 Halsall, who has been Bangladesh's fielding and assistant coach since mid-2014, has been given the job after the BCB failed to appoint a new head coach before the ODI tri-series against Sri Lanka and Zimbabwe.

"I think Chandika's principal reason for leaving was that he thought that he cannot add any more to the players at the moment," Halsall said. "So I think that's a really good place for the players to be at, because Chandika not being here will give them more space to think and more responsibility.

"But Bangladesh is very lucky as they have got some excellent senior players like Shakib, Mashrafe, the two captains, and Mushfiqur, Mahmudullah, and Tamim. These players now can be more involved. I think when you get older you become more responsible. That's exciting. I think it is another exciting step for that group of players."

There remains a lot of anticipation about Hathurusingha's return to Bangladesh as Sri Lanka's coach after his resignation in November.

"We have got lots of good players here but they did not play well in South Africa. They did play well in a couple of games in the Champions Trophy, specifically in the New Zealand game. So we have good players, we have to get them playing good cricket. That comes from your preparation and being back home always helps," he said.

Halsall said that Bangladesh is a more settled side compared to Sri Lanka. "We are playing Sri Lanka who had a tough time playing India just recently," Halsall said. "They have had moments in the ODIs against India but have not come through. So Sri Lanka, we know are a good side and got very good players but we are playing here in Mirpur and I think apart from the English side no one has beaten us here in three years or so.

"Bangladesh comparatively is a settled side. The head coach leaving is less significant than big players leaving. None of our big players left, none of our young players have left but the coach has left. It's very different to Sri Lanka, who have lost some of their players... like Malinga not getting selected - those type things. We have not got those problems. So I think it's a very settled group and I look forward to being on their team."-Cricinfo