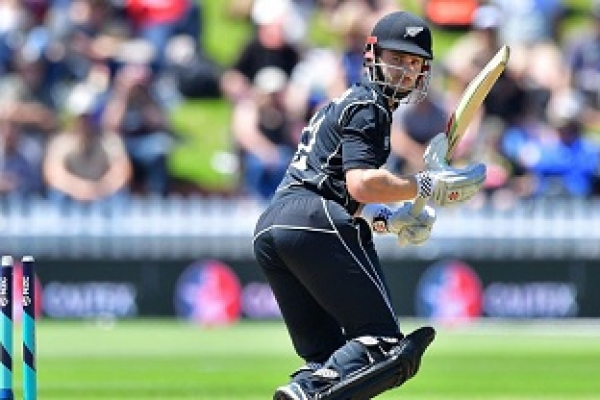 New Zealand ended Pakistan’s run of nine consecutive wins in one-day internationals when they beat the Champions Trophy holders by 61 runs under the Duckworth-Lewis system on Saturday to open the five-match series.

Captain Kane Williamson made 115 to lead New Zealand to 315-7 as they batted first after losing the toss. Pakistan were 166-6 after 30.1 overs when rain brought the match to an early end.

Opener Fakhar Zaman was 82 not out and Faheem Ashraf 17 was not out but Pakistan were well short of the 227 runs it needed to win the match under the Duckworth-Lewis system when rain finally set in.

New Zealand swing bowler Tim Southee captured two wickets in the first over of the Pakistan innings to place the tourists under immediate pressure in reply.

Southee trapped both Azhar Ali (6) and Babar Azam (0) lbw within his opening over, then took a catch from Trent Boult’s bowling to dismiss Mohammad Hafeez (1) to leave Pakistan’s innings in disarray at 13-3.

Fakhar batted superbly to recover the innings, reaching his half century from 63 balls and putting on 78 for the sixth wicket with Shadab Khan. But Pakistan never approached the
run-rate they needed to win the match whether or not rain intervened.

New Zealand were on top from the start as Williamson, currently the No. 4-ranked batsman in ODI cricket, reached his 10th ODI century from 106 balls to lead his team to a record total at the Basin Reserve.

Opener Colin Munro also enhanced his reputation as one of the world’s leading ODI batsmen, giving the New Zealand innings a sound foundation with is fifth ODI half century.

Munro, the top-ranked batsmen in Twenty20 internationals, hit 58 from 35 balls to give the hosts a rapid beginning in conditions in which scoring generally required careful application.

“Obviously, we’ve been playing a lot of cricket recently against the West Indies and it was a different competition against Pakistan,” Williamson said.

“The way we batted with Colin and Martin (Guptill) at the top of the order set the tone coming into a new series and getting past the 300 mark on that surface was an above-par
effort.”

Despite being covered during two days of rain — the reason Pakistan captain Sarfraz Ahmed chose to bowl on winning the toss — the pitch at the Basin Reserve was hard and
provided good pace and carry, even a little seam movement.

Undeterred by those conditions, Munro reached his 50 off just 33 balls with five fours and two sixes.

He went to his half century with a six from the bowling of Hasan Ali and added one more boundary before he was out to end an 83-run opening partnership with Martin Guptill (48).

Williamson then added 73 with Guptill for the second wicket and 90 with Henry Nicholls for the fifth before finally falling in the 48th over. Nicholls again played a strong hand
near the end, hitting 50 from 53 balls.

The Pakistan seamers, who found a little assistance from the pitch, used shorter balls and slower deliveries to try and limit the scoring options of the New Zealand batsmen.

Munro was the only batsman who was able to launch an all-out attack on the bowlers and Williamson notably achieved his century by quiet accumulation. His innings contained only eight fours and one six and, in total, New Zealand hit only 25 fours and five sixes.

Hasan Ali, ranked the best bowler in the world in ODIs, was again Pakistan’s best on Saturday, taking 3-61.

“Obviously it was very tough conditions for us,” Sarfraz said of the wet, windy and cold weather. “Credit to the New Zealand batsmen, they batted very well. “Hopefully we will sit together, talk about it and do better in the next match.”