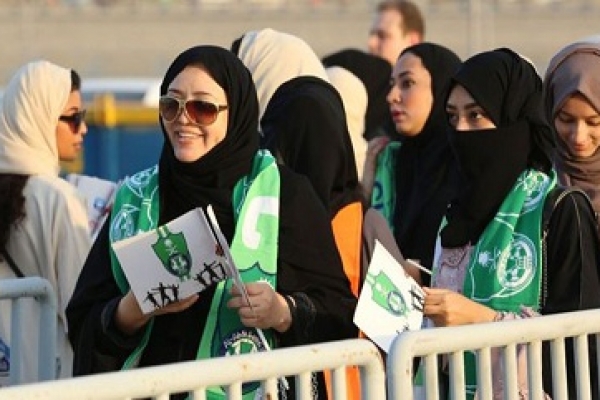 Saudi Arabia has for the first time allowed women to spectate at a football match, part of an easing of strict rules on gender separation by the ultra-conservative Muslim country.

Women fans filed into a stadium in the city of Jeddah on Friday, through family gates into family seating. But even segregated as they were, their presence in the stadium marked a significant moment for the Kingdom. It follows a series of reforms intended to modernise the country.

Earlier on Friday, ahead of the football game, there was another small sign of change: the country's first car showroom dedicated to female customers was opened.

For the first time, women will this June be allowed to get behind the wheel, after it was announced in September that a ban on women drivers would be lifted.

Women at the car showroom milled around inspecting vehicles that they will be allowed to take out on the road when the ban ends.
At the stadium in Jeddah, female ushers were employed to greet the women fans and their families, who loudly cheered on the local team. Both ushers and fans wore the traditional black abaya robe.

A hashtag, translated as "the people welcome the entry of women into stadiums", was used tens of thousands of times in two hours as the match took place.

Lamya Khaled Nasser, a 32-year-old football fan from Jeddah, told AFP she was proud and looking forward to the match.
"This event proves that we are heading for a prosperous future. I am very proud to be a witness of this massive change," she told the AFP news agency.

Ruwayda Ali Qassem, another Jeddah resident, said it was a "historic day in the kingdom which culminates (in) ongoing fundamental changes".
"I am proud and extremely happy for this development and for the kingdom's moves to catch up with civilised measures adopted by many countries," she said.

The Saudi government said last week women would be allowed to attend the second match on Saturday and a third next Thursday.
Ahead of the game on Friday, clubs took to Twitter to encourage women to attend, with some even offering the traditional abaya robe in team colours.

Saudi Arabia's royal family and religious establishment adhere to an austere form of Sunni Islam known as Wahhabism, and Islamic codes of behaviour and dress are strictly enforced.

Under Saudi Arabia's guardianship system, women must be accompanied by a male family member to travel, and work. Most restaurants and cafes have two sections, one for just men and one for families, which are for women and their husbands and families.

There are many things that Saudi women are still unable to do without permission from the men in their lives, including:

The recent reforms are part of a gradual process of modernisation under Crown Prince Mohammed bin Salman, who is attempting to make the Kingdom more moderate.

A decades-long ban on cinemas was lifted in December as part of the crown prince's vision to boost the country's entertainment industry. The move followed the country's first Comic-Con convention in Jeddah in February.

However, there has been some opposition to the reforms by Saudi clerics and conservative members of society. They believe the morals of Saudi citizens will be corrupted and they have challenged perceptions of Islamic and national identity.