Zimbabwe cleaned up for 170

Zimbabwe cleaned up for 170 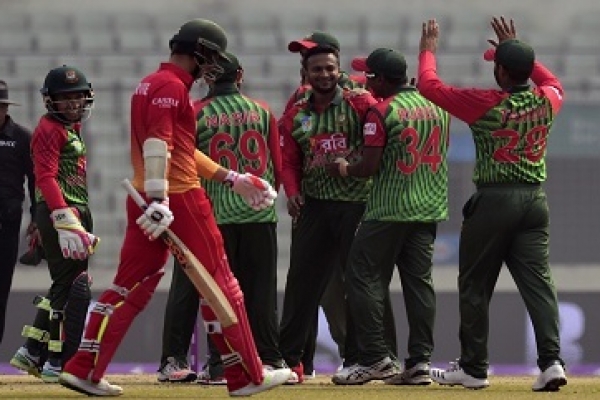 Visiting Zimbabwe are undone by the dominating bowling effort from Bangladesh at Mirpur  Sher-e-Bangla National Cricket Stadium in the first match of Tri-Nation Series 2018 and all out for just 170 runs.

Losing two wickets in the first over is not the ideal start when asked to bat first. Solomon Mire and Craig Ervine fell prey to Shakib in the very first over and Hamilton Masakadza played an audacious shot to throw his wicket away.

Brendan Taylor and Sikandar Raza tried to resurrect the innings, but the Fizz, Mustafizur Rahman, sent Taylor back to the pavilion. Raza continued to rebuild the innings and got himself to a fifty. Just when he looked set to bat through, a run-out cut short his innings. The rest folded quite quickly and Zimbabwe ended with 170.

With 14-day long tri-nation series, the Bangladesh National Cricket Team is commencing their new year on Monday when hosts Bangladesh will be up against Zimbabwe in Mirpur.

Followed by the encounter between Sri Lanka and Bangladesh, according to the schedule, the second match of the series will see Sri Lanka and Zimbabwe locking horns with each other at the same venue.

Bangladesh, Sri Lanka and Zimbabwe will play each other twice in the two-week tournament, ending with a final on January 27 when Bangladesh become a strong one-day team in recent times.

Sri Lanka will also participate in a two-match Test series against Bangladesh when the first Test will be held on January 31 to February 4 at Zahur Ahmed Chowdhury Stadium in Chittagong while the second Test on February 8-12 at Sher-e-Bangla National Cricket Stadium, after the tri-nation series.