Bangladesh win by 8 wickets against Zimbabwe

Bangladesh win by 8 wickets against Zimbabwe 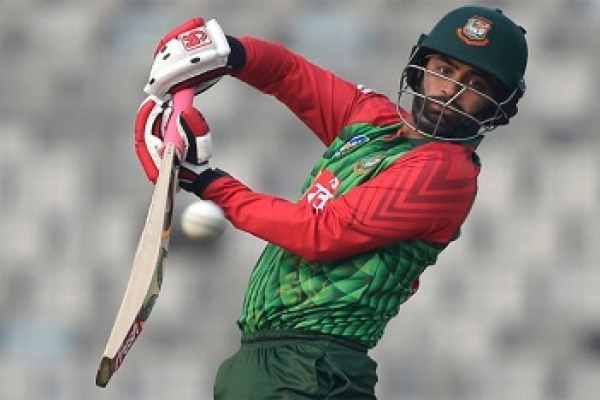 Bangladesh clinched an eight-wicket victory against Zimbabwe in only 28.3 overs in the opening ODI match in the Tri-Nation Series at Sher-e-Bangla Stadium in Dhaka.

An unbeaten 84 from Tamim Iqbal and an all-round performance by Shakib Al Hasan helped Bangladesh seal an easy win over Zimbabwe in the opening match on Monday.

Chasing 171-run target set by visiting Zimbabwe, Tamim and Shakib made 78 in the second wicket to pave the way for the win.

Tamim scored an unbeaten 84 runs off 93 balls with eight boundaries and an over boundaries while Shakib made 37 off 46 balls with five boundaries before falling victim to Sikandar Raza.

Raza had also removed Anamul Haque (19), back in the fold for the first time since the 2015 World Cup.

Earlier, a Raza half century helped Zimbabwe manage a decent total of 170 in front of a controlled Bangladesh bowling.

The hosts bowlers had an excellent day, led by Shakib Al Hasan who took three wickets while Mustafizur Rahman and Rubel Hossain bagged two wickets each.

Earlier, Bangladesh skipper Mashrafe Mortaza chose to bowl first after winning the toss in the first match against Zimbabwe, and Shakib’s first over only vindicated his captain’s decision.

He first got opener Solomon Mire stumped thanks to some good work from wicket-keeper Mushfiqur Rahim and then Sabbir Rahman took a catch to dismiss Craig Ervine to leave Zimbabwe 2/2 with just three balls bowled in the game.

Hamilton Masakadza and Brendan Taylor then added 28, but Mashrafe removed the former to pile more pressure on Zimbabwe and Mustafiz got ride of Taylor (24) to foil another attempt of a fightback.

Amid regular fall of wickets, Raza's 52 off 99 balls, made with two boundaries and two over boundaries, and Peter Moor's 33 salvaged some pride for the Zimbabweans.

The losing side will play their next game against Sri Lanka on Wednesday, while the hosts play their South Asian rivals two days later.