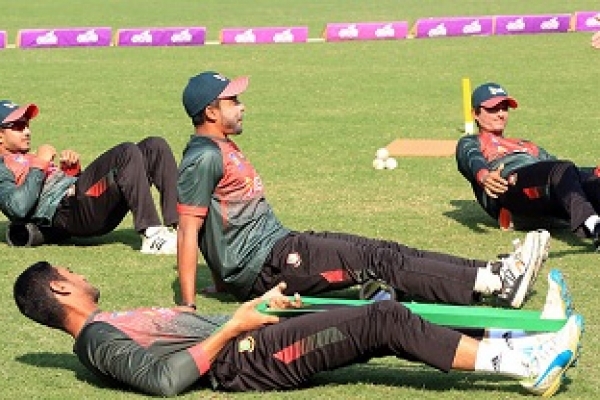 Bangladesh will take on visiting Sri Lanka in the first T20I of the two-match series scheduled to be held on Thursday at Sher-e-Bangla National Cricket Stadium at Mirpur.

The match kicks off at 5pm.

The Tigers are hoping that they can win the first T20I to at least have a chance of registering victory in one of the formats. But with the current form of the visitors, they are likely to have a difficult task ahead of them, BSS reported.

The big blow for Bangladesh team as the home side is that they have a number of significant absentees in their squad, including their regular skipper Shakib Al-Hasan, who was ruled out from the first match after sustaining a finger injury during the tri-nation final.

Ahead of the T20 series, Bangladesh picked up five new faces in their squad and there are speculations that the Tigers were experimenting too much with these new inclusions, however, captain Mahmudullah Riyad speaking at a press conference today prior to their first match against Sri Lanka suggested that it is better to play T20I cricket without fear of failure.

In every series, Tigers look to include one or two new players and give them an opportunity to get acquainted with international cricket, but this time around, one-third of the 15-member squad is composed of new players, who have never featured for the team.

The Tigers' skipper Mahmudullah however suggested that T20 is a different ball game and they are less bothered about what happened in the ODIs and the Tests.

Mahmudullah said they have kept confidence on the new comers as they are well deserved in the team and hoped that they are able to put in their best performance to win the T20 series against Sri Lanka.

On the other hand, Sri Lanka, after a glorious comeback in the ODI tri- series against Bangladesh and Zimbabwe, skipper Dinesh Chandimal have also raised the victory flag in Test cricket against the Tigers. The Sri Lankan skipper hoped he can once again start off things in winning ways. Sri Lanka has a full squad, except injured Angelo Mathews.

Sri Lankan opener Upal Tharanga said they were able to put up a brilliant display in both ODI and Test series and they want to show their best performance in the T20I format as well.

He said they have got some new faces for the T20 series and they are in a good momentum now and all are looking forward ahead to have a good result.

The second and final T20I between the two sides will be played on Saturday (February 18) in Sylhet.