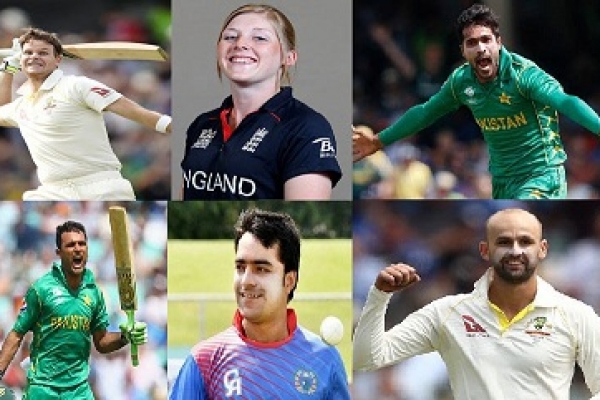 Steven Smith, Nathan Lyon, Heather Knight, Fakhar Zaman and Mohammad Amir are among the winners of the ESPNcricinfo Awards for the best performances in cricket in 2017.

Smith's battling 109 in Australia's unexpected win in Pune won for best Test batting performance, beating his eight-and-a-half-hour 141 not out at the Gabba, and Shai Hope's match-winning final-innings century in Headingley, among other performances.

Lyon's 8 for 50 was picked for the Test bowling award, over R Ashwin's 6 for 41 in the same Test, in Bengaluru.

Knight, the England Women captain, who led her side to the World Cup title (and wins in 11 matches out of 15 overall in the year), won the Captain of the Year award over Smith, Virat Kohli and Sarfraz Ahmed. It was the first time women were nominated in the category.

Both ODI awards went to Champions Trophy winners Pakistan - Zaman's 114 not out, in just his fourth ODI, and Mohammad Amir's inspired spell of 3 for 16, both in the Champions Trophy final against India, were picked over Rohit Sharma's third career double-hundred and Rashid Khan's seven-for against West Indies.

Rashid, who was nominated three times this year, the most of any player, won the Associate bowling performance of the year for that 7 for 18.

The T20I batting award went to Evin Lewis, who made 125 not out, the highest score in a T20I chase, in Kingston against India. Yuzvendra Chahal was voted the T20I bowling winner for his 6 for 25 against England in Bengaluru.

This is the 11th edition of the ESPNcricinfo Awards, where a jury of former players - among them Ian Chappell, Courtney Walsh, Ramiz Raja, Daryll Cullinan, Ajit Agarkar and Mark Nicholas - and ESPNcricinfo's senior editors vote on the best performances of the previous year.

The Associate batting award went to Kyle Coetzer for his century in Scotland's 26-run win over Zimbabwe, their first ODI win over a Full Member.

The 2017 Women's World Cup was a landmark event in terms of viewership and fast-paced action, and the winning performances in the awards came in the two most watched games - Harmanpreet Kaur's ballistic 171 not out from India's semi-final against Australia, and Anya Shrubsole's title-clinching 6 for 46 for England against India in the final.