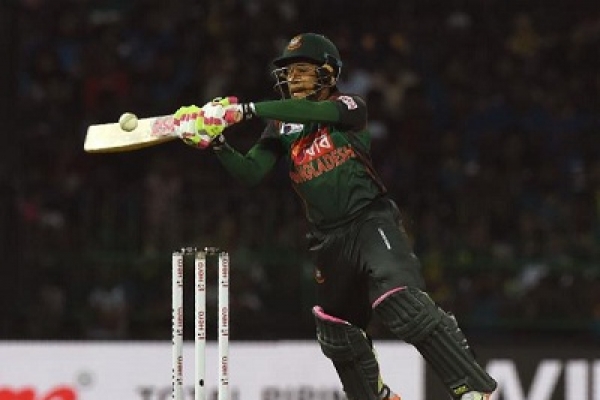 A collective effort from the batsmen orchestrated by Mushfiqur Rahim helped Bangladesh scale their highest ever chase in the Nidahas Trophy T20 game against Sri Lanka on Saturday.

Mushfiq slammed 72 from 35 balls, made with five fours and four sixes as the Tigers romped to a five-wicket win.

Undaunted by the 215-run target, openers Tamim Iqbal and Liton Das set the perfect platform for the team when they made 74 in the first wicket, in only 5.5 overs.

Liton was the most brutal, his 43 came in just 19 balls, courtesy of two fours and five sixes. Like his fellow opener, Tamim also missed a fifty, but after the much-needed and much-awaited win that would hardly matter to them.

Soumya Sarkar added 24 from 22 before Mushfiqur Rahim took things in his hands, leading the team to victory against the odds.

He was duly supported by his captain Mahmudullah, who hit 20 precious runs from 11 balls.

Put into bat first by Mahmudullah, blistering fifties from Kusal Mendis and Kusal Perera helped Sri Lanka to 214 for 6.

Openers Mendis and Danushka Gunathilaka blasted 52 in the first four overs to give the hosts the perfect start.

Speedster Mustafizur Rahman broke the stand bowling Gunathilaka (26), but Mendis and Perera then added 95 in the third wicket to put Sri Lanka in control.

Mahmudullah then removed Mendis and Dasun Shanaka in quick succession, yet Upul Tharanga's 32 in 15 balls took the Lankans past 200.

Perera was the top-scorer with 74 off 48 balls, his innings studded with eight fours and two sixes, while Mendis' 30-ball 57 featured two fours and five sixes.

Mustafiz bagged two more wickets late in the game to take his tally to three on the day.