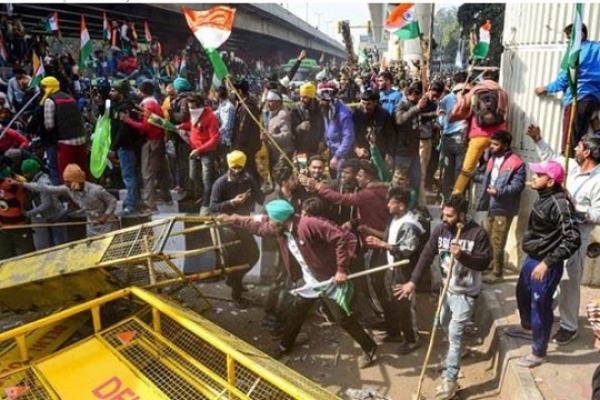 Tens of thousands of Indian farmers have stormed the Mughal-era Red Fort complex in the national capital to demand the repeal of new farm laws, with the protest turning violent and resulting in at least one death.

A “tractor rally” called by the protesting farmers in New Delhi on Tuesday saw them clashing with police who fired tear gas and launched a baton-charge as the protesters broke barricades to march to the heart of the city amid Republic Day celebrations.

For two months now, the farmers had been camping on the outskirts of New Delhi, asking Prime Minister Narendra Modi’s government to withdraw the contentious laws passed in September last year.

It is at the Red Fort that the Indian tricolour is hoisted on August 15 every year by India’s prime minister to mark the country’s independence from the British rule in 1947.

At least one farmer, who remains unidentified, has died during the protest and farmers have refused to hand over the body to the police. The cause of death is not clear yet.

The massive protests have also forced the shutting down of several metro stations, while internet services were suspended in many areas of the capital and its adjoining areas.

Earlier on Tuesday morning, waving multicoloured flags and holding placards, the protesting farmers marched on tractors, cars, motorbikes, horses and on foot from the outskirts of the city, where they had been camping for two months._Al Jazeera