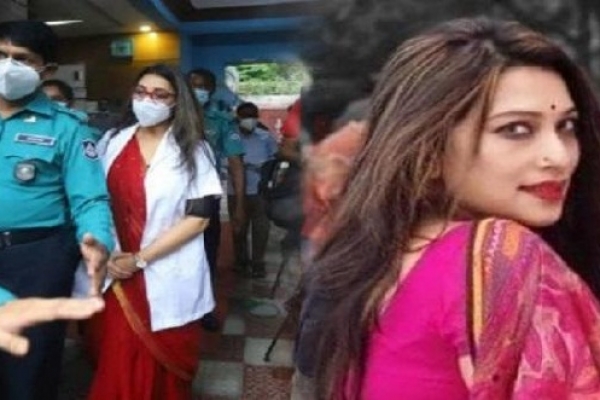 A Dhaka court passed the order on Monday after she was produced Khaled before it with a four-day remand prayer. The court also denied her bail petition. Earlier on Sunday, Sabrina was expelled from the National Institute of Cardiovascular Diseases by the Health Ministry.

According to a statement of the ministry, police arrested Sabrina for allegedly engaging in fake corona test reports and embezzling huge money.

Being a government official, holding the post of chairman of a non-government organization without the permission of the government and embezzling money is a punishable offense.

It said Sabrina was suspended in accordance with Rule 12 (1) of the Civil Servants (Discipline and Appeal) Rules, 2018. Sabrina was arrested over coronavirus test report scam on Sunday afternoon.

She was called to the Tejgaon DC office of the Dhaka Metropolitan Police (DMP) of the police for questioning on Sunday. After the primary grilling, Sabrina was arrested.

“She’s called for interrogation. We showed her arrested in case filed earlier over the corona test deception as she could not give satisfactory answers to our questions," Harun-Ur-Rashid, DMP’s deputy commissioner (DC) of Tejgaon Division.

Sabrina, a cardiac surgeon of the National Institute of Cardiovascular Diseases, went to the Tejgaon Division office of the DMP around 1 pm. Later police questioned her for around three hours about the JKG’s deceptive activities, but she could not give proper answers.

Earlier on June 24, police arrested her husband and JKG Health Care CEO Ariful Chaudhury and four others from the capital for allegedly providing fake coronavirus test reports without carrying out any test.A case was also filed against them in this regard.