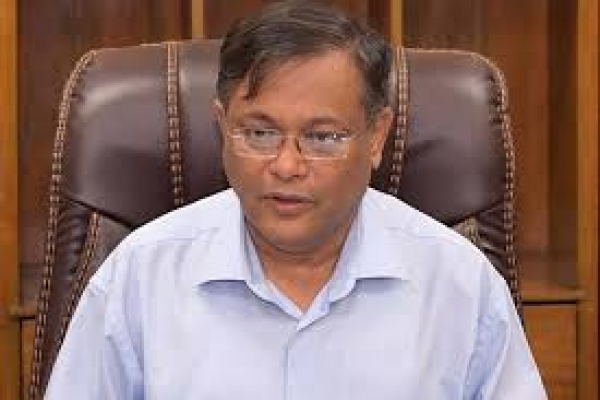 Information Minister Dr Hasan Mahmud today congratulated Chairperson of the National Advisory Committee on Neurodevelopmental Disorders and Autism Saima Wazed Hossain as she has been chosen as a “Thematic Ambassador” by Climate Vulnerable Forum (CVF) under the thematic domain of ‘Vulnerability’.

In a congratulatory message, the information minister said Bangladesh has become an innocent victim of world climate change despite having little contribution to global carbon emission.

But, Hasan, also Awami League joint general secretary and former environment minister, said it is a matter of pride that the country is recognized as a pioneer in realizing rights through struggle before the world under the dynamic leadership of Prime Minister Sheikh Hasina.

The information minister said, following the footsteps of the Premier, her daughter SaimaWazed will now stand before the world as a CVF Ambassador on behalf of those countries which are in at risk and vulnerable for the climate change and global warming. “I sincerely wish her very success in fulfilling the responsibility”, said Hasan, also former environment affairs secretary of AL.

SaimaWazed Hossain, Chairperson of the National Advisory Committee on Neurodevelopmental Disorders and Autism, has been made a “Thematic Ambassador” by Climate Vulnerable Forum (CVF) under the thematic domain of ‘Vulnerability’on Wednesday.

She is a member of World Health Organization’s Expert Advisory Panel on mental health and Goodwill Ambassador on Autism of South-East Asia of the organization.

Besides Saima, the CVF also made Speaker and former President of the Maldives Mohamed Nasheed, Deputy Speaker of the Parliament of the Philippines Loren Legarda and Lead Climate Change Specialist of DR of Congo Tosi Mpanu-Mpanu as its “Thematic Ambassadors” under three other thematic domains – Ambition, Parliament and Renewable Energy respectively.

Bangladesh formally took over the presidency of the Climate Vulnerable Forum (CVF) and the Vulnerable Twenty (V20) Group of Ministers of Finance for the term 2020-2022.-BSS