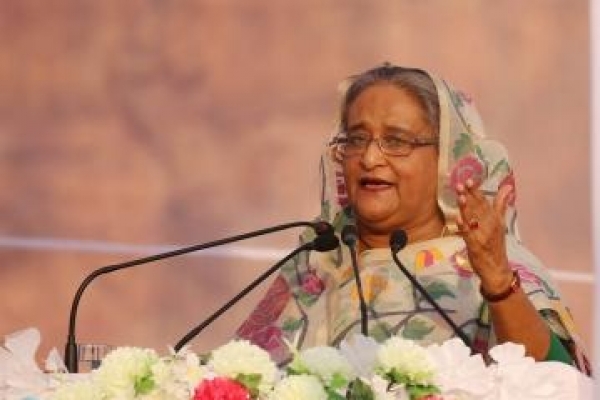 Prime Minister Sheikh Hasina today asked all concerned to keep up the growth, achieved in agriculture amid the coronavirus pandemic, to ensure food security alongside making efforts to achieve the sustainable development goals (SDGs), reports BSS.

“Though the coronavirus outbreak put us back to some extent, we would have to maintain the growth that had been achieved in the agriculture amid the pandemic to ensure that our people don’t suffer from food crisis,” she said.

The prime minister said this while delivering her introductory speech at the weekly meeting of the Executive Committee of the National Economic Council (ECNEC) through a videoconference from her official Ganabhaban residence here this morning.

Planning Minister MA Mannan was present at Ganabhaban, while other ECNEC members were connected to it from the NEC conference room at Sher-e-Bangla Nagar in the capital.

Sheikh Hasina, also the ECNEC chairperson, spelled out various measures taken by her government in the last 11 years for the development of agriculture.

“We’ve been giving all sorts of cooperation to the farmers with reducing price of fertilizer, distributing quality seeds and other agricultural inputs to ensure food security,” she said.

She said the price of fertilizer has been cut multiple times since the Awami League government assumed office. “The price of DAP fertilizer was Taka 90 per kilogram during the BNP regime, but the farmers are now getting it at Taka 12,” she said.

She prayed for eternal peace of the departed souls of her party leaders and activists who died from COVID-19 being infected with the disease while cutting the paddy.

The premier said: “It’s our duty to standby by the people. Other problems could be solved, if we make sure foods in houses.”

The premier reiterated that her government has been tirelessly working to achieve the SDGs despite the onslaught of the COVID-19 on the country’s economy.

“We’ve a target to achieve the SDGs. We have incorporated 17 goals of the SDGs in our eighth five-year plan, and started its execution to attain the SDGs … we will be able to achieve it (SDGs) Insha Allah,” she said.