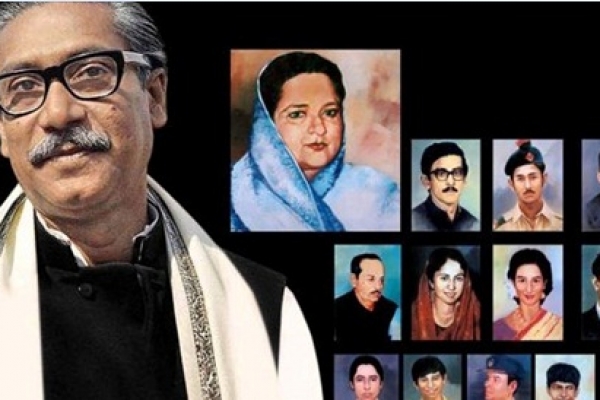 The nation is set to observe the National Mourning Day today, marking the 45th martyrdom anniversary of Father of the Nation Bangabandhu Sheikh Mujibur Rahman.

Father of the Nation Bangabandhu Sheikh Mujibur Rahman and most of his family members were brutally killed by some disgruntled army men on the fateful night of August 15, 1975 and this carnage is considered as the ugliest chapter of the nation’s history.

The self-confessed killers of August 15 did not assassinate Bangabandhu alone, but also killed 16 other members of his family, friends and relatives.

Prime Minister Sheikh Hasina, the eldest daughter of Bangabandhu, escaped the planned assassination with her sister Sheikh Rehana as they were staying overseas then.

The killing of Bangabandhu, the greatest son of the soil in thousand years, descended a pall of gloom and spread a sense of deep sadness among the people in the country and across the globe. The world protested and condemned the killing, saying it is an irreparable loss to millions of people of Bangladesh.

Like previous years, the government, Awami League and different political and socio-cultural organisations, educational institutions and professional groups chalked out elaborate programmes to pay the utmost respect to the greatest son of the soil on the day of his martyrdom, but this year all programmes will be held by maintaining the social distancing in wake of the global pandemic coronavirus (COVID-19).

The nation, however, started observing the month of mourning from August 1, recalling the most brutal killing in its history and renewing the pledge to safeguard perpetually the country’s independence and sovereignty. The government drew elaborate programmes to observe the Day with due
respect and solemnity.

As part of the programme, the national flags are kept hoisted half-mast atop the buildings of all government, semi-government, autonomous, educational institutions and private offices today.

Wreaths will be placed at the portrait of Father of the Nation Bangabandhu Sheikh Mujibur Rahman in front of Bangabandhu Memorial Museum in the city and a munajat will be offered there at 6.30 am on August 15.

Wreaths will also be placed at the graves of Bangabandhu’s martyred family members and other martyrs of August 15, 1975 at Banani Graveyard in the city and offering fateha and munajat will be held there at 7.30 am on the day.

Wreaths will too be laid at the Mazar of Bangabandhu Sheikh Mujibur Rahman at Tungipara in Gopalganj district around 10 am. Fateha will be offered and a special doa will be held there maintaining social distancing.

To mark the National Mourning Day, special munajats will be offered at all mosques across the country after Johr prayers while special prayers will take place at all temples, churches, pagodas and other places of worship at convenient time.

Bangladesh Betar and Bangladesh Television will air special programmes in observance of the National Mourning day. National newspapers and magazines will publish special supplements on the occasion. Besides, specially designed posters on Bangabandhu will be printed and distributed while documentary on him will be screened on the occasion.

The specially designed posters on National Mourning Day will be displayed at important public places, including at educational institutions or growth centers, reminding the black chapter of the country’s history. The posters and others programmes marking the day will be publicized through LED display board at different public places.

According to the inter-ministerial meeting, Bangabandhu Memorial Museum can organize lecture on the biography of Bangabandhu and National Mourning Day using virtual platforms on request of the educational institutions, Shishu Academy and such institutions.

In line with the national programmes, different ministries and divisions, departments and agencies will organise various programmes at their respective institutions, maintaining social distancing and health guidelines. Use of virtual platforms should get priority in holding Mourning Day programmes.

District councils and municipalities will join the programmes to be organized by the district and upazila administrations while city
corporations, municipalities and union parishads will also take programmes
coinciding with the national programmes, maintaining social distancing, to observe the National Mourning Day with due respect at their respective institutions. Use of virtual platforms should get priority in holding Mourning Day programmes. Bangladesh missions abroad will also hoist the national flag half-mast and organize discussions marking the day.

The ruling AL has drawn up an elaborate programme centrally to observe the National Mourning Day tomorrow to pay glowing tributes to Bangabandhu and other martyrs of August 15 massacre and take a pledge to work for nation building following the ideology of the father of the nation.

Awami League General Secretary and Road Transport and Bridges Minister Obaidul Quader on Thursday called upon the party leaders and workers to observe the programmes in a befitting manner maintaining the health guidelines.

He also urged all progressive political, socio-cultural organizations and the people to observe the National Mourning Day with due respect in the Mujib Year, the birth centenary of Father of the Nation Bangabandhu Sheikh Mujibur Rahman.

As part of the party programmes, at dawn tomorrow, the national flag and party flag will be kept at half-mast and black flag will be hoisted at the Bangabandhu Bhaban, Awami League (AL) headquarters in the capital city and all other offices of the party across the country.

Tributes will be paid to Bangabandhu by placing wreaths at his portrait on Bangabandhu Memorial Museum premises on the city’s Dhanmondi road number 32 at 8am on the day while Dhaka city units of AL and its associate bodies will pay homage to Bangabandhu through mourning processions.

AL will also pay homage to all martyrs of August 15 carnage by laying wreaths at Banani graveyard at 8:45am while offering fateha, munajat and doa mahfil will be held there.

Besides, homage will be paid to Bangabandhu by placing wreaths at his mausoleum at Tungipara in Gopalganj and offering of fateha, munajat and doa mahfil will also be held there at 10am. A delegation of the AL central working committee and its Gopalganj district and Tungipara upazila units will take part in that programme.

The party will also hold Doa and milad mahfils at mosques across the country after Zohr’s prayers while special prayers will also be offered at temples, pagodas, churches and all places of worships on the day. In the afternoon, food will be distributed among the orphans, poor and
destitute people.

Besides, Mohila Awami League will hold a milad and doa mahfil on Bangabandhu Bhaban premises after Asr prayers tomorrow and will arrange a virtual discussion on August 18 marking the National Mourning Day.

Jubo Mahila League will organize another discussion on August 20 to mark the day while Jubo League will hold a doa mahfil seeking eternal peace of the departed souls of all 15 August martyrs, including Bangabandhu, and distribute food among destitute people on the same day.