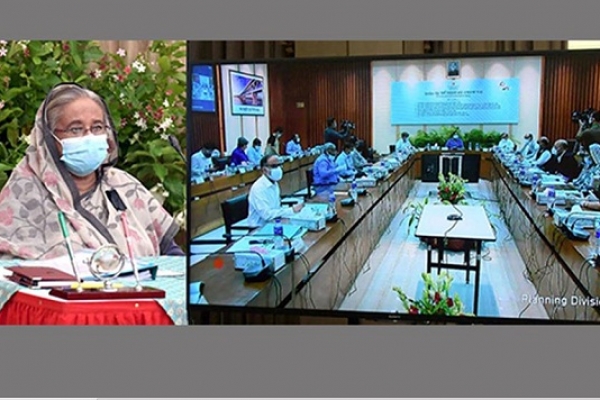 The Executive Committee of the National Economic Council (ECNEC) today approved a Taka 845.53 crore project to widen the Baroiarhat-Heyako-Ramgarh Road in a bid to boost import and export as well as trade and commerce between neighboring India and Bangladesh.

The approval came from the 5th ECNEC meeting of the current fiscal year (FY21) held virtually with ECNEC Chairperson and Prime Minister Sheikh Hasina in the chair. The premier chaired the meeting from her official Ganobhaban residence while Planning Minister MA Mannan also attended the meeting from there.

Briefing the reporters virtually after the meeting, Planning Minister MA Mannan said, “A total of 7 projects were approved today with an overall estimated cost of Taka 3,461.97 crore. Of the total project cost, Taka 2,619.79 crore will come from the government fund while the rest Taka 842.18 crore from the foreign sources.”

Of the approved seven projects, six are new while another is a revised project. The planning minister said the Roads and Highways Department under the Road Transport and Highways Division will implement the road widening project at Ramgarh upazila in Khagrachhari by June 2022. Of the total project cost of Taka 845.53 crore, Taka 581.20 crore will come from the Indian Line of Credit.

He said once this road with Tripura of India is developed and improved, the trade and commerce alongside export and import between Bangladesh and India especially between Tripura and Chattogram and Cox’s Bazar would get a boost. “It will be a win-win situation for both India and Bangladesh,” he added.

Mannan said the Prime Minister during the meeting directed the authorities concerned not to include the component of building a duckbunglo (rest house) under the project, rather to come up with an integrated project to build duckbunglos and rest houses where those are deemed to be needed.

He also informed that a proposal for setting up a border haat (market) at Ramgarh is also under active consideration. Referring to the approval of the upgrading of Daudkandi-Goalmari-Srirayerchar (Cumilla)-Matlab Uttar (Chengarchar) district highway with Taka 524.37 crore, the planning minister said Prime Minister Sheikh Hasina has opposed with the proposal of toll-free road rather to realize toll for cost recovery.

The premier also opined that sufficient fund is required to construct and maintain roads and highways and for this reason these should not be toll-free.

She also stressed the need for improving the feeder roads which eventually link the roads and highways as well as replacing the old and dilapidated bridges with the new ones.

The planning minister said the premier also asked the authorities concerned to develop a model as how to relocate the endangered infrastructures like schools, colleges and madarashas built along the river banks which are vulnerable to river erosion.

The prime minister also renewed her vow to dredge the rivers and canals to cope with the usual flood.

Mannan said the premier has also asked the Ministry of Water Resources to conduct a study over the operations, effectiveness of the sluice gates across the country as most of those do not work. She also suggested them not to construct any new sluice gate.

He said that the Taka 61.06 crore pilot project for extracting Tuna and homogenous fishes at deep sea would explore the potentials for extracting such high value fishes at the exclusive economic zone of Bangladesh at the Bay of Bengal.

This project would also help lure more private investment in extracting such kind of fishes.

When asked about the criticism of some think tanks about the attainment of 5.24 percent GDP growth in the last fiscal year (FY20), Mannan said he would not go for any debate with anyone or any organization over the matter.

“BBS (Bangladesh Bureau of Statistics) is a credible organization and it is being run with trained persons and professionals. We’ve full trust and confidence in their works and what they have done is right,” Mannan added.

The planning minister said Prime Minister Sheikh Hasina in the meeting extended thanks to the officials and employees of the Ministry of Planning and the Planning Commission for giving their all-out efforts to continue the project formulation process during this COVID-19 situation.

Replying to another question, Statistics and Informatics Division Secretary Mohammad Yasmin Chowdhury said that they are not old fashioned and they would continue to formulate the GDP growth estimation in such way which they did in the past.

“Making GDP growth estimation is a routine work and it is done following international standards,” he added.

The other projects approved in the meeting are replacing the narrow and risky and old concrete bridges and bailey bridges with new concrete bridges on the highways under Khulna Roads Zone with Taka 526.42 crore, Protecting Dhulia Lunchghat under Baufal Upazila in Patuakhali and Durgapasha under Bakerganj Upazila in Barishal from the river erosion of Tentulia with Taka 712.21 crore, Removing water logging at Kapotakshya River, 2nd phase with Taka 531.07 crore and Emergency multi-sector Rohingya crisis response project, 1st revised, with Taka 261.31 crore.-BSS