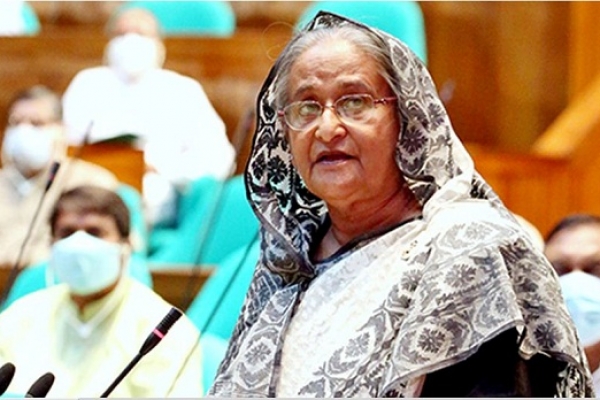 Prime Minister and Leader of the House Sheikh Hasina today asked the authorities concerned to unearth the reason behind the deadly explosion at a mosque in Narayanganj on Friday night that caused multiple deaths and injuries.

“I directed the cabinet secretary and other authorities concerned to find out the reason behind the blast in a mosque of Naraganganj,” she told the Jatiya Sangsad while taking part in a discussion on an obituary motion.

Speaker Dr Shirin Sharmin Chaudhury moved the obituary motion at the opening sitting of the 9th session of the eleventh Jatiya Sangsad on the deaths of former Indian President Pranab Mukherjee, two incumbent lawmakers — Advocate Sahara Khatun and Md Israfil Alam — and other eminent personalities who died since the prorogation of the 8th session of the current parliament.

The premier hoped that the fact behind the explosion in the mosque would definitely come out as a probe team regarding the matter has already been formed and it is working to investigate why and how the tragic incident happened.

“Experts have visited the place of occurrence and samples are being collected to this end,” she added.

The Leader of the House also directed all to find out the fact whether the explosion took place due to irregularities on giving permission of a mosque to a gas pipe line or the mosque having the proper power connection as it has six air-conditioners at such a small place.

“Six air conditioners were installed at such a small place (mosque). Besides, the mosque has been said to be built on a gas pipe line. Usually, no construction on a gas pipe line is allowed. Has RAJUK given permission? None can give such permission having all time risk of happening such an incident. It is being investigated now,” she said.

The premier asked the authorities concerned to look into the matter whether air conditioners are being connected at mosques across the country in an unplanned way or the mosques are being built at unauthorized places.

She went on saying, “It is very necessary to look into the matters. Otherwise, such accidents could happen any time.”

Describing the explosion in a mosque as a matter of sorrow, the premier said that her government has taken every possible measure to provide better treatment to the burn injured people, saying that she is exchanging messages about the updates of the injured people with Dr Samanta Lal Sen, chief coordinator of Sheikh Hasina National Burn and Plastic Surgery Institute.

The premier prayed for eternal peace of the departed souls and conveyed profound sympathy to the bereaved families. She also wished early recovery of the injured.

So far 23 people out of 50, who suffered severe burn injuries in the blast at Baitus Salah Jame Mosque at Fatulla in Narayanganj on Friday night, succumbed to their wounds at Sheikh Hasina National Institute of Burn and Plastic Surgery in the capital.

“It’s a matter of sorrow that we have lost fellow colleagues in the parliament one after another particularly after the outbreak of the coronavirus while many eminent personalities and leaders and activists also died during the period.

The premier also expressed her shock and sorrow at the deaths of the people who died of coronavirus and wished early recovery of the COVID-19 patients.

She described the death of Sahara Khatun, the country’s first female home minister and AL presidium member, as an irrepairable loss to the party and the nation as well.

“She (Sahara Khatun) was a honest, brave and dedicated politician and took part in all the democratic movements from the forefront despite facing inhuman torture by HM Ershad and Khaleda Zia governments,” she said.

About the bravery of Sahara Khatun, the premier said that she went to the BDR headquarters after the mutiny took place (on February 25 and 26 in 2009) and saved many people (from the captivity of BDR) risking her life.

“Sahara Apa told me that she somehow managed to come out of the BDR (headquarters) with life as they (BDR mutineers) wanted to attack her. It could not be possible for a commoner,” Sheikh Hasina added.

Noting that those who could not come to power at that time might have been involved in the massacre, she said, “One day the name of the people involved in it (BDR mutiny) will definitely come out.”

The premier recalled that she always found standing Sahara Khatun beside her since her return to the country in 1981 after six years of forced exile life. “Sahara Khatun gave secure life to the people after getting the charge of home ministry,” she said.

The Leader of the House also paid tributes Israfil Alam said that the country has lost a valiant parliamentarian in his death.

Paying homage to former Indian President Pranab Mukherjee, the premier said that he always stood beside them at their bad times during the 1971 Liberation War and after August 15, 1971 carnage.

Sheikh Hasina said she got the veteran politician of subcontinent and his family as their near and dear ones when they took shelter as refugees in India after losing everything in the 1975 carnage.

“He (Pranab Mukherjee) also fought for Bangladesh in the international arena against the World Bank which suspended funding for the construction of the Padma Bridge after bringing false allegations of corruption,” she said.

The premier said Pranab Mukherjee was a very brilliant and wise politician and was honoured by everyone despite being a leader of Congress, adding that the subcontinent has lost a true leader in his death.

“Both CR Dutta and Abu Osman Chowdhury had played a great role with bravery in achieving the country’s independence,” she added.