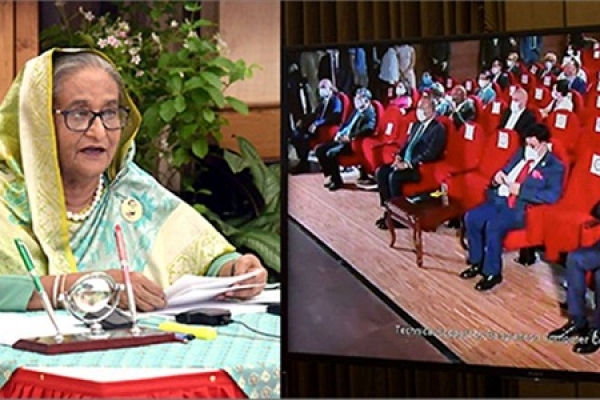 Prime Minister Sheikh Hasina today expressed Bangladesh’s eagerness to take forward its ties with Turkey for the mutual benefits of the two countries, as she virtually inaugurated the newly-constructed Bangladesh Chancery (Embassy) Complex in Ankara.

“Bangladesh attaches great importance to its relations with Turkey. So, the country is keen to take forward this relationship with Turkey for the bilateral benefits of the two peoples,” she told the virtual opening function of the Bangladesh Chancery Complex this afternoon.

In this connection, the premier mentioned that the relations between Bangladesh and Turkey are deeply rooted in shared history, faith, and traditions based on mutual trust and confidence.

Sheikh Hasina joined the virtual ceremony from her official Ganabhaban residence here, while Bangladesh Foreign Minister Dr AK Abdul Momen and his Turkish counterpart Mevlut Cavusoglu spoke at the function as special guests at the Complex in the Turkish capital of Ankara.

Bangladesh Ambassador in Ankara M Allama Siddiki delivered the welcome address at the function. A documentary on the chancery complex was screened at the ceremony.

While talking about the protracted Rohingya crisis, the prime minister thanked the Turkish government for extending support to Bangladesh on this issue and sought its further role in solving the problem.

“Three years have already passed after the exodus of (huge number of) Rohingyas into Bangladesh, and they should go back to their own country … I think Turkey can play a role in this regard,” she said.

The prime minister recalled that formal diplomatic ties between the two countries began in 1974, nearly 50 years ago.

“As we celebrate this historic milestone in our relations, I fondly recall my visit to Ankara at the invitation of the then Prime Minister and now President of Turkey Recep Tayyip Erdogan on 13 April 2012,” she said.

The premier said to achieve vision 2021 and 2041, Bangladesh is set to expand its global outreach by establishing many more diplomatic offices.

“This permanent Embassy complex in Ankara is a testimony to the priority Bangladesh attaches to boost further its friendship with Turkey,” she said.

In this connection, the premier extended invitations to the Turkish president, the first lady and the foreign minister as well. “We’re celebrating the birth centenary of the Father of the Nation and I’ll be happy if they visit Bangladesh at this time and we could celebrate the occasion together,” she said.

The premier pointed out that it took less than two years to complete the construction of the Bangladesh Embassy building with the help of the Turkish as well as Bangladesh authorities concerned.

“The distinct red-brick cladding on the Embassy complex would resonate for long the Bangladeshi architectural impression and heritage,” she said.

Sheikh Hasina said she is happy to know that the spacious complex has all facilities along with a beautiful auditorium, adding it proudly hosts a bust of Father of the Nation Bangabandhu Sheikh Mujibur Rahman and a Shaheed Minar.

“It gives me great pleasure to virtually inaugurate the new Embassy Complex of Bangladesh in Ankara and I’m happy that the project has been completed within the stipulated time,” she said.

“He (Bangabandhu) laid emphasis on global peace and security for the sake of human welfare. His dictum — Friendship to all, malice to none — has been the bedrock of our foreign policy,” she said.

About the present coronavirus pandemic across the globe, Sheikh Hasina said the world is passing through a difficult time due to the COVID-19 pandemic which battered the health systems and the economies of most of the countries across the world.

“In Bangladesh, we have successfully been able to contain the spread of the virus. At the same time our timely and appropriate measures and stimulus packages have also been able to minimize the disastrous effects of the deadly disease,” she said.

The premier said the government has so far announced a set of COVID-19 recovery packages worth 13.25 billion dollar equivalent to 4.03% of the country’s GDP.

Sheikh Hasina commended the Turkish leadership for its success in fighting the deadly pandemic. “I also appreciate its initiative to dispatch medical supplies to different countries, including Bangladesh,” she said.

Noting that Bangladesh is one of the fastest-growing economies in the world, the premier said after showing some initial sluggishness  for a month or two due to the pandemic, the country is overcoming the situation gradually and its exports have started turning around from July.

“The country’s foreign currency reserve now stands at a record 39.40 billion US dollars. We are on the right path to graduate from LDC to a developing country,” she said.

On behalf of the government and her own behalf, Sheikh Hasina thanked Turkish government and the people for extending support on various issues to Bangladesh.

She also opened the e-version of the book “Asamapata Atmajiboni of Bangabandhu” (Unfinished Memoirs of Bangabandhu) in Turkish language virtually.

In his speech, the Turkish foreign minister said that the brotherly relations between Turkey and Bangladesh have deep roots. “We always remember the univocal support of the people of the Indian sub-continent to our war of independence,” he said.

Praising Bangladesh’s magnificent socioeconomic development in recent years, Cavusoglu said Bangladesh is a ‘success story’ in South Asia with its stable economy. “Due to vibrant economy and a huge young population Bangladesh will be our one of the key partners in Asia,” he said.

He expressed hope that new embassy building of Bangladesh will play an important role in further strengthening the friendship and brotherhood between Turkey and Bangladesh.

The Turkish foreign minister accepted the invitation of his Bangladesh counterpart to visit Bangladesh to open their embassy building in Dhaka.

The construction of the Bangladesh Chancery Complex in  Ankara was successfully completed on September 3 last.

As reflection of Bangladesh’s history of independence, a bust of Father of the Nation Bangabandhu Sheikh Mujibur Rahman and a Shaheed Minar were also installed at the Complex.

Moreover, 36 sqm mural works titled ‘Invincible Bangladesh’ as well as terracotta works on the rural life of Bangladesh were placed at the complex.BSS