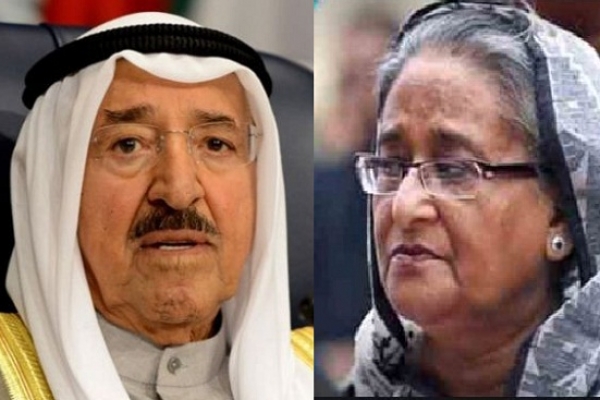 In a condolence message, the premier said, “On behalf of the people and the Government of Bangladesh and my behalf, I am deeply shocked to learn the sad demise of His Highness Sheikh Sabah Al-Ahmad Al-Jaber Al-Sabah, Emir of the State of Kuwait”.

Sheikh Hasina also extended her deep condolences to the brotherly people of Kuwait and expressed her heartfelt sympathy for the bereaved members of the Royal family.

The Prime Minister also said that despite seizing in the emotion and grief, she remembers with absolute admiration, the relation based on the trust and brotherhood between the late Emir, who was the then Foreign Minister of Kuwait, and Father of the Nation, Bangabandhu Sheikh Mujibur Rahman on the early days of newly independent Bangladesh.

She continued that counting on his excellent negotiating skill and universal acceptance, the Father of the Nation was able to earn recognition on Bangladesh’s behalf as a sovereign independent state particularly by the Muslim Ummah.

“I recall with profound gratitude his contributions to the welfare of the Bangladeshi diaspora in Kuwait,” Sheikh Hasina said.

The premier went on saying that the people of Bangladesh deeply value his leadership and contribution to the formation of the Gulf Cooperation Council and promotion of peace and stability in the region and beyond, which will be remembered in the history from generation to generation.

“We also recall his dedicated services to the State of Kuwait and its people,” she said. The Prime Minister prayed to the Allah for the eternal peace of the late Emir’s departed soul and his highest place in Jannah.

She said that may Almighty Allah bestow with courage and fortitude to the bereaved members of the esteemed Royal Family and the brotherly people of Kuwait to bear this irreparable loss. Sheikh Sabah died at a United States hospital around 8pm (Bangladesh time) on Tuesday.