DSCSC graduates will work as soldiers of 2041’s Bangladesh: PM

DSCSC graduates will work as soldiers of 2041’s Bangladesh: PM 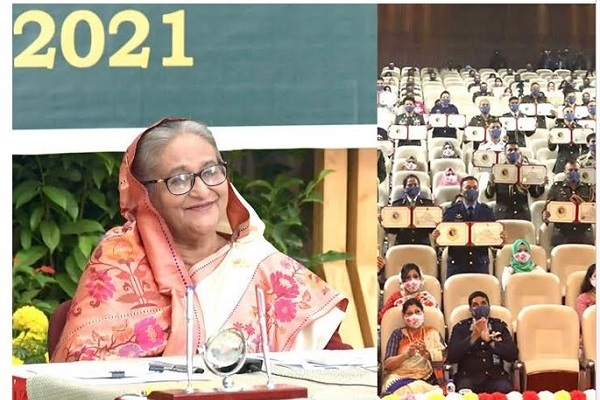 Reiterating her government’s goal to turn Bangladesh into a developed nation by 2041, Prime Minister Sheikh Hasina today expected that DSCSC graduates would pull the country into a sustainable and self-reliant position through their acquired knowledge and commitment.

“Today’s graduates of the Defence Services Command and Staff College (DSCSC) will work as the soldiers of 2041’s Bangladesh,” she said.

The premier was addressing the graduation ceremony of DSCSC’s 2020-21 Course at Sheikh Hasina Complex in DSCSC, joining virtually from her official residence Ganabhaban.

Mentioning that the country is celebrating the birth centenary of Father of the Nation Bangabandhu Sheikh Mujibur Rahman and also going to celebrate the Golden Jubilee of the country’s independence this year, she said the government is working with the goal of making Bangladesh a developed nation by 2041.

Reaffirming her government’s determination to provide house to each landless and homeless people in the “Mujib Barsha”, the Prime Minister said each person would have a house which would be illuminated with electricity as
well as all would get education and healthcare services.

“Each village would be transformed into a town and people would get all the urban facilities staying in the village,” she added.

Referring to the formulation of 100-year long “Delta Plan” for a hunger- poverty free as well as developed-prosperous-non-communal Bangladesh, Sheikh Hasina said country’s independence would be meaning-full if the nation becomes developed one and generation after generation get a better and developed life.

Over Bangladesh’ foreign policy, she said Bangabandhu has given the policy n“friendship to all, malice to none” and that is why the country has been maintaining a friendly relation to all countries.

The premier said although Bangladesh has a limitation on resources and others, but it extended its hands in reply to humanity and gave shelter to 10 lakh forcibly displaced Myanmar nationals, adding “We didn’t engage in any conflict rather continue discussion with Myanmar to send the Rohingya people back to their country.”

Recalling the formulation of country’s first “defence policy” by Father of the Nation in 1974, she said Bangabandhu in his address to the then military academy in Cumilla on January 11, 1975 to the graduated cadets said that “Our boys can face any country’s soldiers if they get full facilities. My Believe, we would build such an academy…people of the whole world would come to
visit it”.

The head of the government said the DSCSC has attained credential globally as a unique educational institution going beyond country due to its academic and other excellences, and so far a total of 1,208 officers of 43 friendly countries completed graduation from here.

In the first year, the DSCSC had 30 students now the number has increased to 225. This year a total of 225 armed forces officers, of which 43 officials from 16 countries, attained PSC graduation. Among this year’s participants, 10 were lady officers including, one foreigner.

She said in line with Bangabandhu’s defence policy, Awami League government after assuming power in 1996 and 2009 have framed “forces goal-2030” for the development, expansion and modernization of Bangladesh Armed Forces.

The premier also lauded DSCSC as it has completed this course even during this Covid-19 pandemic by developing its own e-learning solution with its own
server.

She said not only Bangladesh but also the entire world has entered the New Year 2021 following different adversities and Covid-19 pandemic, adding but Bangladesh has been able to keep its economy rolling along with ensuring health safety of the country’s people.

The government is tackling Coronavirus in many ways and has started vaccination to keep people safe, she added.

The Prime Minister expressing her wholehearted appreciation to the foreign officers for their perseverance during the year-long stay here in Bangladesh amid this pandemic situation.

She said, “You have undergone training along with your Bangladeshi counterparts and you must have developed social bonding and friendship beyond professional relationships.”

“I believe you have grown compassion and respect for Bangladesh and our people in your hearts, and expect that you will act as the good-will ambassadors of Bangladesh from your respective positions,” she said, hoping despite Covid-19 pandemic health restrictions they enjoyed their stay with deep rooted tradition of Bangladeshi hospitality.-BSS