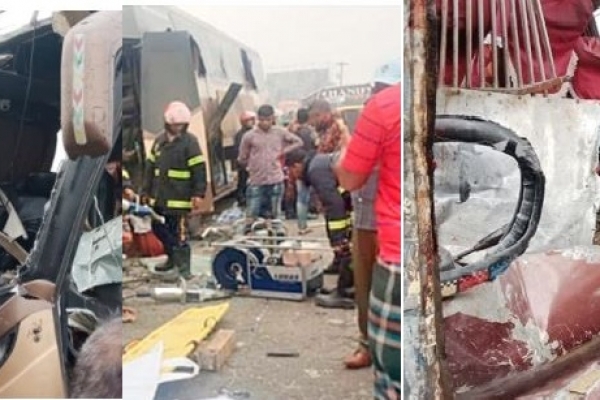 In Sylhet, at least seven people killed in a head-on collision between two buses on Dhaka-Sylhet highway in Rashidpur area of the metro on Friday morning, police said. Dakshin Surma police and fire service members rushed to the scene and started rescue operations.

Additional deputy commissioner (media) of Sylhet metropolitan police, ABM Ashraf Ullah, said police got information of at least seven deaths so far. The number of casualties might rise, he added.

According to police and fire service, a Dhaka-bound bus of Ena Paribahan collided head-on with a bus of London Express coming from Dhaka in Rashidpur area of Sylhet. A local source said drivers of both the buses were killed in the accident. Traffic movement was halted on both sides of the route after the accident.

In Bogura, four people were killed on the spot after a bus hit a CNG-run auto-rickshaw in Shajahanpur upazila of the district around 5:30am today. All of the deceased were passengers of the auto-rickshaw.

Highway police could identify two of the deceased as fish vendor Kalidas, 72, from Demajani village of the upazila and Shah Jamal, 34, from a neighbouring village.