President, PM pays homage to Bangabandhu on his birthday

President, PM pays homage to Bangabandhu on his birthday 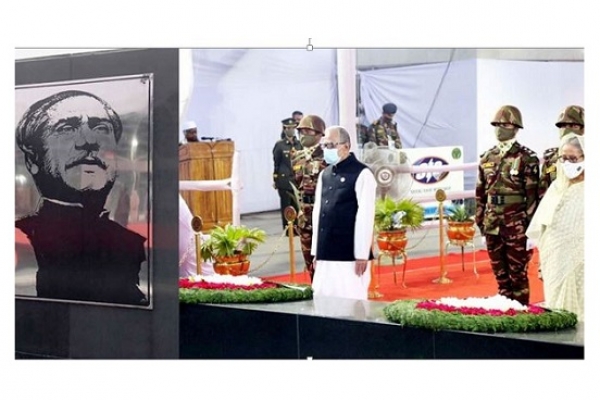 President Abdul Hamid and Prime Minister Sheikh Hasina on Wednesday paid tributes to Father of the Nation Bangabandhu Sheikh Mujibur Rahman, marking his birth anniversary and the National Children’s Day-2021, by placing wreaths at the portrait of the great leader. First the President and then the Prime Minister laid wreaths at the portrait of the greatest Bangali of all times in front of Bangabandhu Memorial Museum at Dhanmondi in the early morning.

After placing the wreaths, the President and the Prime Minister stood there in solemn silence for some time as a mark of their profound respect to the memory of the architect of independence, Bangabandhu Sheikh Mujibur Rahman.

A special munajat was offered during the time seeking eternal peace of the departed soul of Bangabandhu Sheikh Mujibur Rahman, Sheikh Fazilatunnesa Mujib and other martyrs of the 15th August carnage.

Prayers were also offered for the continued peace, progress and prosperity of the country and the nation.

Later, the Prime Minister entered Bangabandhu Memorial Museum and placed a wreath at the stair where the bloodstained and bullet-ridden body of the great leader fell on the black night of the 15th of August, 1975.