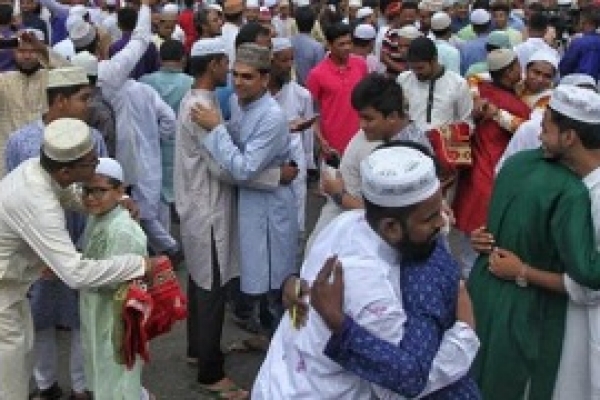 Eid-ul-Azha, the second biggest religious festival of Muslims, is being celebrated across the country today (Monday) with due solemnity and religious fervour.

Devotees gathered at Eidgahs to offer prayers in the morning. They sought divine blessings and prayed for peace and prosperity of the country.

After prayers, well-off Muslims started sacrificing their loved animals in commemoration of Prophet Ibrahim's devotion to Allah as illustrated by his readiness to give up his beloved son Ismail.

Eid-ul-Azha is celebrated on the 10th of Zilhajj month of the Hizri calendar as Hazrat Ibrahim (AS), on this day, some 4,500 years ago, offered to sacrifice his beloved son Hazrat Ismail (AS) who willingly submitted to the will of his father to please Allah.

But the Almighty in His benign mercy spared Hazrat Ismail (AS) and instead sent a ram to be sacrificed.

To commemorate this historic event, the Muslims all over the world slaughter sacrificial animals and draw inspiration from the unique example of sacrifice to please Allah as shown by two great prophets -- Hazrat Ibrahim (AS) and Hazrat Ismail (AS).

Like previous years, the country’s biggest Eid congregations were held at Sholakia Eidgah in Kishoreganj and Gor-e-Shaheed Baro Maidan in Dinajpur.

In Dhaka, the biggest congregation was held at the National Eidgah where President Abdul Hamid offered his prayers along with people from all walks of life.

Eid congregations were also held at the Baitul Mukarram National Mosque and various places in the capital.

Television channels and radio stations are airing special programmes on the occasions. Special diets will be served at hospitals, jails, government orphanages, centres for persons with disabilities, shelter homes and vagrant and destitute welfare centres.

President Abdul Hamid and Prime Minister Sheikh Hasina greeted the country's people as well as Muslims across the world on the occasion of Eid.

In his message, the President urged people to realise the lesson of sacrifice (Qurbani). “Peace and amity will be established when the teachings of sacrifice are reflected in our personal and social lives,” he said.

The President said he hoped the people would sacrifice animals at designated spots and work to remove wastes.

In her message, the Prime Minister urged people to be imbued with the teachings of Eid-ul-Azha and participate in public welfare activities to build a peaceful, prosperous, and happy Bangladesh devoid of discriminations.