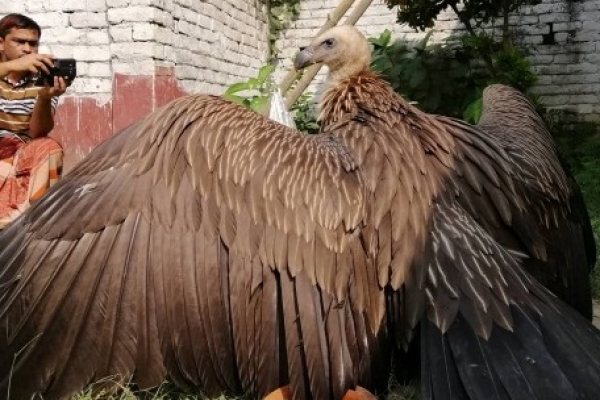 A Himalayan Griffon Vulture was rescued from Gabtali upazila of Bogura today.

Bogura forest department officials and International Union for Conservation of Nature jointly rescued the vulture from Rameshwar Bazar area in the upazila around 1.30 pm, our correspondent report from the spot.

Shahadat Hossain, a student, first sported the vulture sitting on a Mehgani tree in the area on Friday afternoon.

“I saw a big-sized bird sitting on the tree was unable to fly from a tree to another. I climbed up the tree and brought it down. Later, I kept it at a shop of Rameshwar Bazar where many people thronged to see it,” Shahdat told our correspondent Mostafa Sabuj who was also one of the rescuers.

The bird was handed over to the authority of the Vulture Rescue Centre at Singra National Park in Dinajpur and it will be freed in nature after the necessary treatment, said Zaglul Hossain, conservator of forest, social forest circle, Bogura.

The griffon is one of the largest vultures in the world that scientifically known as Gyps Himalayensis and it migrates Bangladesh in winter session, he said.

Sarowar Alam Dipu, a senior programme officer of the IUCN Bangladesh, said every year around 100 Himalayan’s griffons come to Bangladesh from Himalaya during the winter season.

“We mostly get these in the northern districts when they become tired and fall down on the earth. We use to take care of the vulture and free in forest,” he said.

There were seven species of vulture in Bangladesh and among those, red-headed vultures have already extinct.

Among the rest six species, two species are residential and four are migratory, he said.

“Now, we can see the presence of only 300-350 vultures in Bangladesh,” Dipu said.- thedailystar