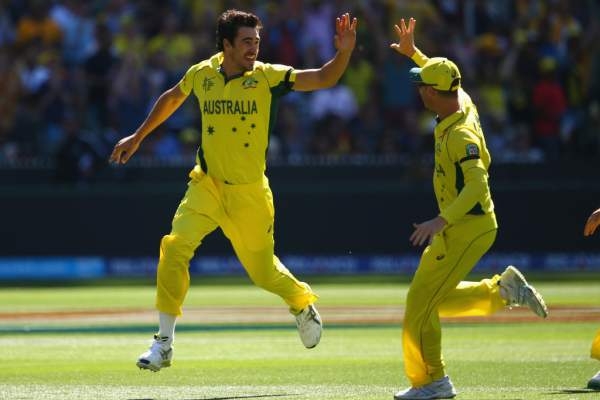 Australia imposed ICC Cricket World Cup final ducks on New Zealand's power hitters, Brendon McCullum, Corey Anderson and Luke Ronchi on either side of century stand between Ross Taylor and Grant Elliott to give themselves a wonderful chance of becoming only the second side after India to win the trophy at home on Sunday.

New Zealand were overwhelmed not so much by the occasion or the massive attendance of over 92,000 fans at the breathtaking Melbourne Cricket Ground as they were ...Details»

Play began in muggy conditions and prospects of a shower or two - heralds of Cyclone Pam - could not ...Details»

Two teams at opposite ends of the Full-Member spectrum will finish their group-stage engagements tomorrow. As far as the World ...Details»

The biggest game in Ireland's history and their captain, William Porterfield, stood tall with his seventh ODI hundred but Pakistan's ...Details»

Even the most ardent of Big East rivals can usually wrap up a game in regulation. That was true of ...Details»

The Rev. Rob Hagan immediately thought of the parable of the barren fig tree. As the chaplain for the Villanova ...Details»

Defending champion India ran away with a victory over Zimbabwe at Auckland in the World Cup today riding on an ...Details»