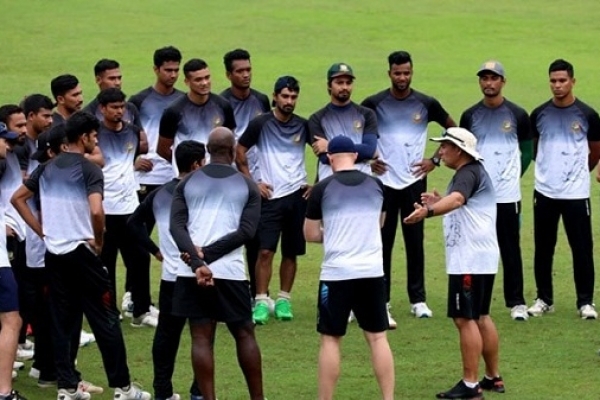 The Bangladesh Cricket Board (BCB) announced a 20-member squad for the national team’s tour of New Zealand on Friday, including left-arm spinner Nasum Ahmed as only the new face.

All-rounder Mosaddek Hossain Saikat, opener Naim Sheikh and fast bowler Al-Amin Hossain who were not in the team against West Indies series also made a return to the side.

Left-arm spinner Taijul Islam was dropped from the previous squad along with Shakib Al Hasan who skipped the tour due to be with his wife as they ...Details»

BCB to grant leave to Mustafiz for IPL

All-rounder Shakib al Hasan will skip the forthcoming tour of Sri Lanka to play in the Indian Premier League.

Tamim, Soumya among other cricketers get Covid-19 vaccine

All-rounder Shakib Al Hasan has registered his name to play the upcoming Indian Premier League (IPL) 2021. Not only Shakib ...Details»

Man of the Match Mirage in career best bowling

Mehdi Hasan Miraj has bowled the best bowling of his career against West Indies. He took 4 wickets with only 25 ...Details»

Bangladesh defeated West Indies by 7 wickets in the second of the three-match ODI series at Sher-e-Bangla National Cricket Stadium ...Details»

Sri Lanka tour not possible under such terms: Nazmul Hasan

Bangladesh Cricket Board (BCB) President Nazmul Hasan has said that it is not possible for Bangladesh team to tour Sri ...Details»