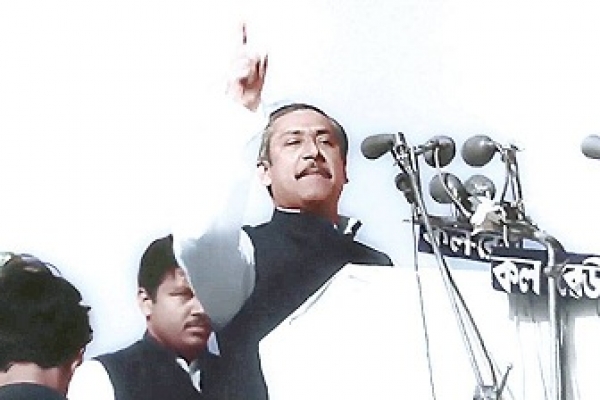 A grand rally will be held in city's Suhrawardy Udyan tomorrow to celebrate the recognition of Father of the Nation Bangabandhu Sheikh Mujibur Rahman's historic March 7 speech as a world documentary heritage by UNESCO.

Nagorik Committee is organizing the rally where Prime Minister Sheikh Hasina will attend it as the chief guest.

Dhaka University Emeritus Professor Dr Anisuzzaman will preside over the rally at 2:30 pm.

UNESCO Director General Irina Bokova announced it saying the historic 7th March speech of Bangabandhu has been included in the Memory of the World International Register, a list of world's important documentary heritage maintained by the UNESCO.

Nagorik Committee has taken all preparations to make the rally a success.

During the visit, the AL general secretary told journalists that the rally organized by Nagorik Committee is not any "counter political rally".

The ruling Awami League is set to showdown its political strength through rallies and various programmes in the coming weeks, party sources said.

They said they will gather a huge number of people at tomorrow's grand rally at Suhrawardy Udyan to highlight its popularity.

Earlier on Wednesday, AL central committee organized a meeting at the party president's Dhanmondi office to make the grand rally a success.

AL lawmakers from Dhaka and leaders of associate organisations attended the meeting.

AL General Secretary Obaidul Quader, in the meeting, directed all leaders and lawmakers to gather a huge number of people in the rally.