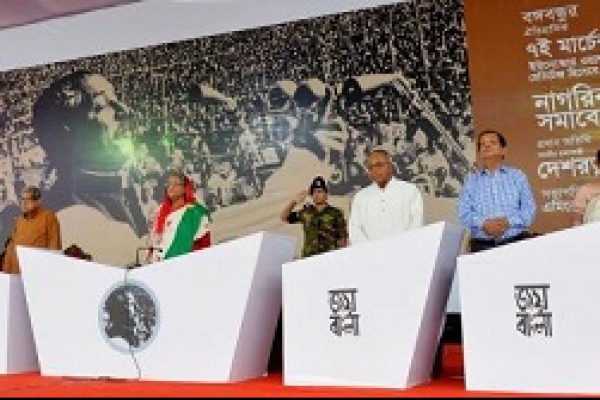 The historic Suhrawardy Udyan became alive again with chanting of the reverberated slogans of the Liberation War drawing a mammoth crowd to celebrate the UNESCO recognition of Bangabandhu’s 7th March speech.

The venue, called at that time the Race Course Maidan, appeared to be an integral part of national heritage as Father of the Nation Bangabandhu Sheikh Mujibur Rahman delivered his historic fiery extempore speech 46 years ago to prepare the nation for the eventual Liberation War, which began only 18 days after the address freedom; the struggle this time is the struggle for independence”.

Only 18 days after the historic event the Father of the Nation gave the declaration of the independence on March 26 while the ground was used to mark the emergence of independent Bangladesh staging the surrender of Pakistani army on December 16, 1971.

The same venue witnessed another historic event when Bangabandhu addressed an emotion choked mammoth rally on his Home Coming Day on January 10, 1972, when he returned from Pakistani jail as the founder of a new born nation.

The international recognition of the 7th March speech as a “world documentary heritage” today turned the historic ground once again into a human sea as tens of thousands of people came to join the civic rally organized by the Citizens’ Committee led by Professor Emeritus Anisuzzaman for celebration.

Since morning, people in thousands from all strata of lives irrespective of caste, creed and gender started rallying at the ground carrying colorful banners and festoons inscribed with “Joy Bangla” and different Liberation War time slogans.

The artificial lake inside the Suhrawardy Udyan was decorated with “jute laden sailing boat” while the sails carried different parts of Bangabandhu’s 7th March speech.

A soiree of Shilpakala Academy artists performed the national anthem to begin the function while noted singers Momtaj, Shahin Samad and Sajid Akbor enthralled the audience with Rabindra Sangeet, Nazrul Getti and other patriotic and folk songs.

UNESCO Country Representative in Dhaka Beatrice Kaldun, journalist Golam Sarwar and Shyamoli Nasrin Chowdhury, wife of martyred intellectual Dr Aleem Chowdhury also spoke on the occasion.
Awami League General Secretary and Road Transport Minister Obaidul Quader read out a letter of the vote of thanks to Director General of the UNESCO for the recognition to March 7 Speech of Bangabandhu.

The United Nations Educational, Scientific and Cultural Organisation (UNESCO) on October 30, 2017 announced inclusion of Bangabandhu’s historic March 7 speech in the Memory of the World International Register.