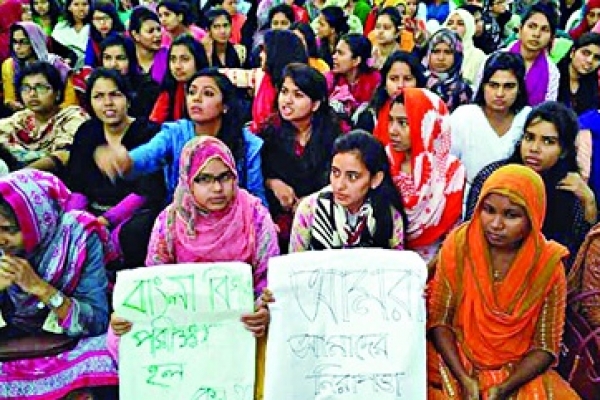 The Rajshahi University student, who was abducted allegedly by her estranged husband from the university campus, has been rescued from the capital on Saturday afternoon.

Confirming the news, RU proctor Mohammed Lutfor Rahman said: "A team of Rajshahi police rescued the student from the capital with the help of Dhaka police. Her estranged husband was also captured and they are being brought back to Rajshahi."

Earlier on Friday, hundreds of general students of Rajshahi University took to the street following the abduction of the 4th-year student of Bangla Department.

According to the witness, the female student, who resides in Taposhi Rabeya Hall of the university, was forcefully pushed into a microbus from outside of the hall around 8 am on Friday while she was going to sit in an examination.

Witnesses said the female student earlier filed a divorce petition, which will come into effect by the next month,  to get separated from her husband Sohel Rana.

On Friday morning, Sohel appeared in front of the female dormitory and tried to convince the female student to withdraw the petition.

At one stage of the altercation, Sohel forcibly dragged her into his microbus, said the victim's friends.

Soon after the news spread on the campus, hundreds of general students took to the street and staged a demonstration, demanding immediate rescue of the victim.

They besieged the house of the vice-chancellor in the afternoon and issued an ultimatum.