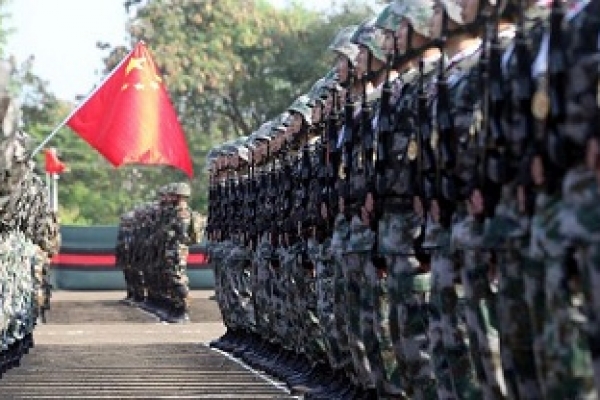 China and Myanmar have had close diplomatic and economic ties for years, including increasingly in the strategically important oil and gas sectors, and China has offered its support to its southern neighbor, also known as Burma, throughout a crisis over its treatment of its Rohingya Muslim minority.

More than 600,000 Rohingya have fled from Buddhist-majority Myanmar’s Rakhine State, most to neighboring Bangladesh, since a Myanmar military crackdown in response to attacks on the security forces by Rohingya insurgents in August.

The United States on Wednesday for the first time called the Myanmar military operation against the Rohingya “ethnic cleansing” and threatened targeted sanctions against those responsible for “horrendous atrocities”.

“In the face of a complex and changeable regional security situation, China is willing to maintain strategic communication between the two countries’ militaries,” Li was cited as saying in the statement issued late on Wednesday.

China wanted greater contacts between the two armed forces and deeper training and technical exchanges and to promote border defense cooperation to ensure peace and stability along their common border, Li added.

China has been angered by fighting between Myanmar’s military and autonomy-seeking ethnic minority rebels close to the Chinese border in recent years, which has at times forced thousands of villagers to flee into China.

The Chinese ministry made no direct mention of the Rohingya issue in the statement.

CLOSE TIES
China built close ties with Myanmar’s generals during years of military rule, when Western countries imposed sanctions on Myanmar for its suppression of the democracy movement.

More recently, their ties have included oil and gas as Myanmar pumps natural gas from the Bay of Bengal to China. A new oil pipeline, opened this year, also feeds Middle East crude through Myanmar to a new refinery in Yunnan, southwest China.

This has opened a new oil supply route to China, avoiding the Strait of Malacca and Singapore.

The United States and other Western countries have stepped up engagement with Myanmar since the military began handing power to civilians in 2011, and especially since former democracy leader Aung San Suu Kyi won a 2015 election.

But an international outcry over Myanmar’s violations of the rights of the Rohingya has raised questions in Western countries about that engagement.