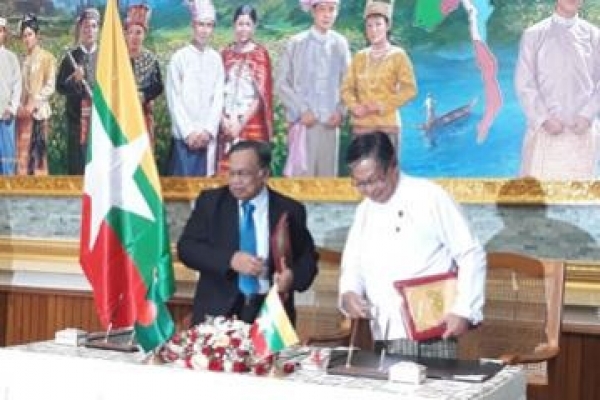 Bangladesh and Myanmar today signed a memorandum of understanding (MoU) for the repatriation of hundreds of thousands of Rohingyas who fled to the neighbouring country to escape a military crackdown in Western rakhine state, the foreign office said.

"Later in afternoon (yesterday) Foreign Minister Mahmood Ali and the Union Minister U Kyaw Tint Swe resolved the remaining issues and finalized the draft after discussion," the statement said.

The "Arrangement", it said, stipulated that "the return (of Rohingyas) shall commence within two months" while a Joint Working Group would be established within next three weeks and a "specific bilateral instrument (physical arrangement) for repatriation will be concluded in a speedy manner".

Ali today also handed over three ambulances for Rakhine State as "gift from the government of Bangladesh" to the Union Minister of Social Welfare, Relief Resettlement U Win Myat Aye at latter's Office in Naypyidaw.

The statement said the foreign minister earlier today called on the State Counsellor Aung San Suu Kyi and also discussed issues of mutual cooperation in areas of trade, energy and connectivity under BCIM while reports from Myanmar capital said their meeting lasted for 45 minutes.

According to the statement during the visit, Ali and Tint Swe exchanged the long awaited "Instrument of Ratification" of the Agreement on demarcation of the land section of the boundary north of the Naaf River" concluded in 1998.

"The two countries also signed "Supplementary Protocol on the demarcation of a fixed boundary in the Naaf River" earlier agreed in 2007," it said.

The foreign minister Ali also handed over three ambulances for Rakhine State as "gift from the government of Bangladesh" to the Union Minister of Social Welfare, Relief Resettlement U Win Myat Aye at latter's Office in Myanmar capital.

"Our Foreign Minister is there (Myanmar) and we're hopeful that we'll be able to strike an understanding with them and they would take back their nationals," she said.

Bangladesh officials concerned said the deal was a "first step" while Myanmar said it was ready to receive the Rohingya "as soon as possible".

"We are ready to take them back as soon as possible after Bangladesh sends the forms back to us," foreign news agencies said quoting Myint Kyaing, a permanent secretary at Myanmar's ministry of labour, immigration and population.

At least 620,000 Rohingya from Myanmar's Rakhine state fled to Bangladesh, seeking refuge from what Burma's military has called "clearance operations".

The development came amid mounting global pressure on Myanmar over the crisis while the United States overnight changed its stance on atrocities on the Rohingyas, now preferring to call it ethnic cleansing" in line with the UN stance and threatened penalties for Myanmar military officials.

"After a careful and thorough analysis of available facts, it is clear that the situation in northern Rakhine state constitutes ethnic cleansing against the Rohingya," Secretary of State Rex Tillerson he said in a statement on Wednesday.

On the contrary, what he had said on November 15 was "Whether it (atrocities) meets all the criteria of ethnic cleansing we continue to determine ourselves".