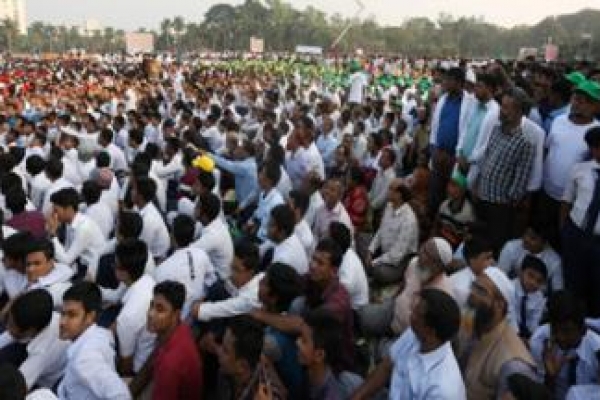 The nation today celebrated the UNESCO recognition of the historic March 7 speech of Father of the Nation Bangabandhu Sheikh Mujibur Rahman peacefully with much enthusiasm and festivity across the country.

As part of the celebration, jubilant processions, essay and quiz competitions and screening of films on the Liberation War were held at all 64 districts, all upazilas and in the capital.

In the capital, the day-long celebration began at 12 noon through placing wreaths at the portrait of Father of the Nation Bangabandhu Sheikh Mujibur Rahman at Bangabandhu Residence on Dhanmondi Road-32.

Later, a procession from there with banners and festoons moved towards the historic Suhrawardy Uddyan where Bangabandhu had delivered the landmark speech in a mammoth gathering on March 7, 1971.

Prime Minister Sheikh Hasina addressed the grand rally as the chief guest at 3:43 pm at the Suhrawardy Uddyan.

Following the address of the Prime Minister, a cultural function and a leaser show were held.

Besides, the district and upazila level programmes began at 10 am through placing wreaths at the portrait of Father of the Nation Bangabandhu Sheikh Mujibur Rahman in the respective areas.

Apart from this, educational institutions across the country organized essay, quiz and general knowledge competitions marking the great achievement.

The historic March 7 speech of Father of the Nation Bangabandhu Sheikh Mujibur Rahman has been included in the Memory of World International Register, a list of world's important documentary heritage maintained by UNESCO.

UNESCO formally recognised the historic March 7 speech of Bangabandhu as part of the world's documentary heritage with the announcement of the Director General of UNESCO, Irina Bokova, at the UNESCO Headquarters in Paris on October 30.