10 feared dead as Pakistan cracks down on hardliners

10 feared dead as Pakistan cracks down on hardliners 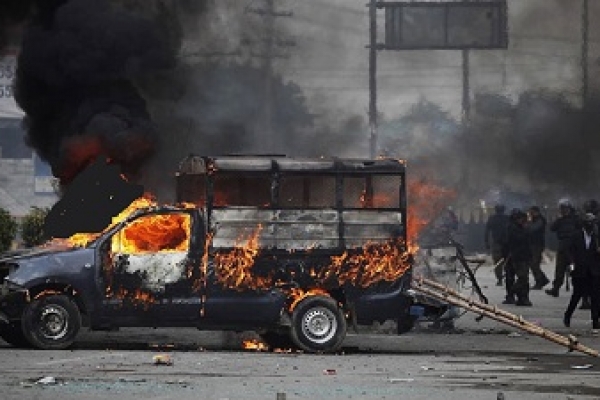 Ten persons were feared killed and more than 250 injured in clashes as the Pakistani government cracked down on protesters from hardline religious groups.

The hardline religious groups had been blocking the busiest highway between Islamabad and Rawalpindi for the last three weeks demanding the resignation of law minister Zahid Hamid.

Late Saturday night, even as the government had suspended the crackdown, the Army had to be called in to restore law and order in Islamabad as the situation went out of hand. The army will be deployed in various parts of the city to secure main offices of the judiciary, Parliament House, presidency, PM House, foreign missions, foreign office and other crucial installations.

Earlier in the day, police and paramilitary force had launched the crackdown against religious protesters using water cannons and tear gas canisters. The protesters, however, managed to wrest control of a large area, burning dozens of tents to lessen the impact of teargas shelling.

Fearing that live coverage of the crackdown could further intensify the protests, the government blacked out all TV news channels and blocked popular social media sites. However the unrest in Islamabad spilled over to other major cities, including Karachi, Hyderabad, Lahore, Gujrat, Gujranwala, Faisalabad and Peshawar, with religious parties staging demonstrations.

Late in the evening, the government suspended the crackdown. Sources said the law minister had offered to resign, but this could not be confirmed. Protesters attacked Hamid's residence in Sialkot district. He and his family were not present at the time.

A missing clause in the Elections Act 2017 passed in September angered the protesters, who are objecting to the changes made in Khatm-i-Nabuwwat or finality of Prophet Muhammad in an oath. The protests are being led by Khadim Hussain Rizvi, the firebrand chief of Tehreek-e-Labaik Ya Rasool Allah, a religious group which was recently registered as a mainstream political party by the Election Commission of Pakistan. Other fundamentalist groups like Tehreek-i-Khatm-i-Nabuwwat and Sunni Tehreek Pakistan have also joined in.

Calling it a clerical error, the government had subsequently rectified the omission of the clause but the hardline clerics were not satisfied. They have been demanding that Hamid be sacked and tried.

The government launched the crackdown on Saturday morning when it was taken in by surprise after a fresh batch of nearly 2000 protesters entered Islamabad through the Express Highway. This happened after the final deadline of 7am for the agitators to end their sit-in had expired. Interior minister Ahsan Iqbal said the operation was being conducted on Islamabad HC's directive which had ordered to end the sit-in within three days.

Protesters entered the residence of former home minister Chaudhry Nisar Ali Khan and set fire to the main gate. Nisar and his family were not there at the time of the attack. A building, an armoured personnel carrier and a mobile satellite van near Nisar's residence were also set ablaze.

Javed Latif, a lawmaker of the ruling PML-Nawaz, was beaten up by protesters after he had gone to negotiate on behalf of the government. Media personnel covering the protests across the country also came under attack in various cities. In Islamabad, a private channel's DSNG van was set on fire, while in Karachi, Geo News team members were assaulted by protestors.-Times of India