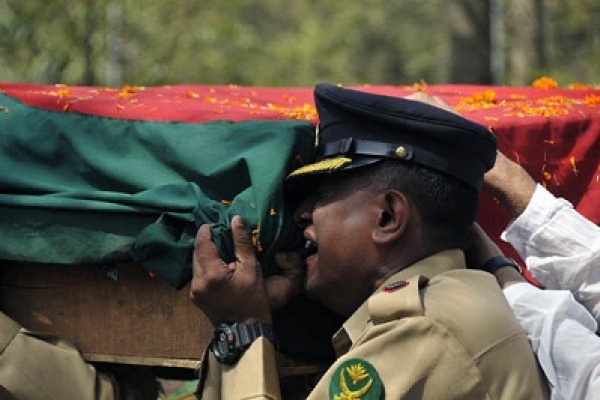 The High Court began to deliver its verdict on death references of 152 people convicted of killings during the 2009 BDR mutiny and their appeals against the capital punishment on Sunday.

bdnews24.com adds : The court will also issue the verdict on the state's appeal for increasing prison terms to those sentenced to different time periods and against the release of 194.

The bench heard the death references, and appeals for more than a year and put the case up for the verdict on Apr 13.

Death sentences issued by the trial court are forwarded as death references for the High Court's approval.

The Supreme Court announced the final date of the verdict on its website on Nov 12.

In November 2013, a special court of an additional metropolitan sessions judge awarded the death penalty to 152 jawans and non-commissioned officer of the erstwhile Bangladesh Rifles or BDR for the 2009 Peelkhana mutiny massacre.

Never before had so many accused, 850 in total, been tried in a single case in the history of Bangladesh.

Four of the accused died during the trial while BNP leader Nasir Uddin Ahmed Pintu died after conviction.

Seventy-four people, including 57 army officers, who were posted in the paramilitary border guard force, were killed in the Feb 25-26 mutiny in 2009.

The mutiny in the force, a month after a new government took office, sent shock waves across Bangladesh and to the rest of the world.

When the High Court put the case up for the verdict on Apr 13, Attorney General Alam said, "Some of the accused should have been sentenced to death, but they were not awarded the capital punishment."

He said the State appealed for increasing punishment of some of the accused and against the acquittal of some others.

"It can't be said whether all the death sentences will hold. The court will check if every one of them was involved in the killings," he said.

Aminul, one of the main lawyers for the accused, said, "The State failed to present sufficient witnesses and evidence to prove the charges against the accused. So I hope most of them will be acquitted."