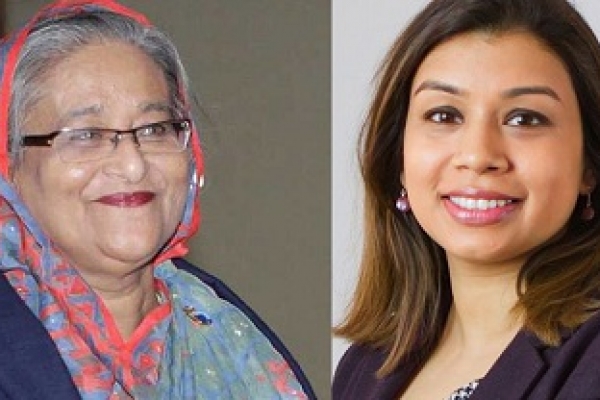 The cabinet today adopted a resolution congratulating Prime Minister Sheikh Hasina on her being chosen as one of the top honest and hard-working leaders in the world.

People's and Politics, a research firm of global politics, ranked Sheikh Hasina as the 3rd of the 17 global leaders who fulfilled five criteria. They were selected from leaders of 173 countries.

The international research firm also chose the prime minister, as the fourth most hard-working leader.

German Chacellor Angela Merkel topped the list of the honest leaders of 173 countries. She has got 90 points out of 100. The Prime Minister of Singapore, Lee Hsien Loong, stood second with 88.

Prime Minister Sheikh Hasina secured the 3rd position in the list with 87 score. Securing 85, Norway's Prime Minister Erna Solberg stood 4th in the list and Iran's President Hassan Rouhani, who got 81, bagged the fifth place on the list.

The honesty of the leaders has been measured based on five criteria -- no foreign bank account, level of increase of the personal assets after coming into power, information about the accumulation of hidden assets, specific corruption charges and thought of the people of the leader's country.

It has been found in the research published recently by the organisation that Sheikh Hasina does not have any bank account abroad. Apart from her salary, no additional income has been found.

The research has also confirmed that Sheikh Hasina does not have any hidden assets, while some 78 percent people of Bangladesh believe that she is honest and does not have lust.

The cabinet adopted another resolution greeting British Labour Party MP and granddaughter of Father of the Nation Bangabandhu Sheikh Mujibur Rahman, Tulip Rizwana Siddiq, as she received an award for 'Labour Newcomer MP of the year' at the annual Patchwork Foundation Awards in Westminster.

Speaker of the House of Commons John Simon Bercow recently handed over the award to Tulip, daughter of Sheikh Rehana and niece of Prime Minister Sheikh Hasina.

The Patchwork Foundation is a UK-wide organisation that supports the integration of different communities into British democracy and civil society.

Many of those who receive awards use their speeches to further encourage young people to engage in the political world that governs their lives. Attendees include Government cabinet members, other ministers and the Speaker of the House of Commons.

Patchwork's annual awards provide politicians with the opportunity to reflect on the projects and campaigns led by the organisation. Tulip Siddiq MP has worked hard over the last year on a wide range of issues, including the campaign to Free Nazanin Zaghari-Ratcliffe, and on Early Years.

The organisation enjoys support from both the current Prime Minister Theresa May and Leader of the Opposition Jeremy Corbyn.

In addition to awards ceremonies, Patchwork runs events and masterclasses to bring youth leaders together with current politicians. It also plays an important role in encouraging young people to vote when there is a major election in the UK.