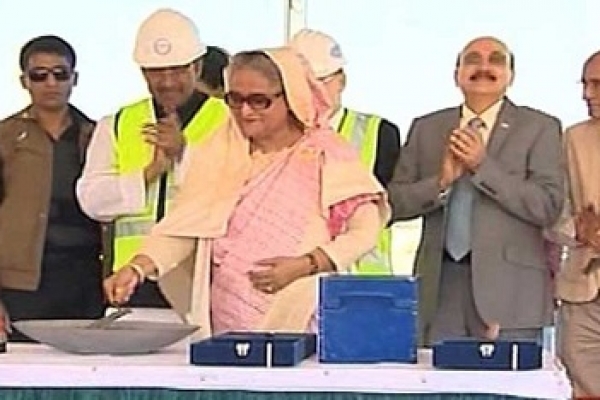 She formally launched the main construction work of the plant by pouring concrete at the plant site at Rooppur in Ishwardi of northern Pabna district this morning.

The Rooppur plant is expected to add 2,400MW of electricity to the national grid by 2024, helping the country to meet an increasing demand for electricity.

The mega project is being implemented by the state-run Bangladesh Atomic Energy Commission (BAEC) under the Science and Technology Ministry, with financial, technical and technological support by Russia through its state nuclear agency, Rosatom.

Atomostroyexport, the contractor appointed by Russia's state-owned atomic power body , Rosatom, will construct the RNPP at a cost of $12.65 billion, out of which, $10.1 billion has been fixed as base price, $1 billion for soil stabilisation and further cost, and the remaining $1.65 billion for price escalation.

On December 15 in 2015, the government finalised the amount for the biggest-ever investment project in the country's history by inking an initial agreement with Russia.

Earlier in January 2013, an inter-governmental agreement was signed for the provision of a $500 million Russian loan to finance engineering design, site development and personnel training.

Russia will provide all assistance under the agreement for setting up the plant, including providing the fuel and taking back the used fuel.

A total of 262 acres of land have been acquired to set up two units of the plant with a capacity of 2,400-MW.