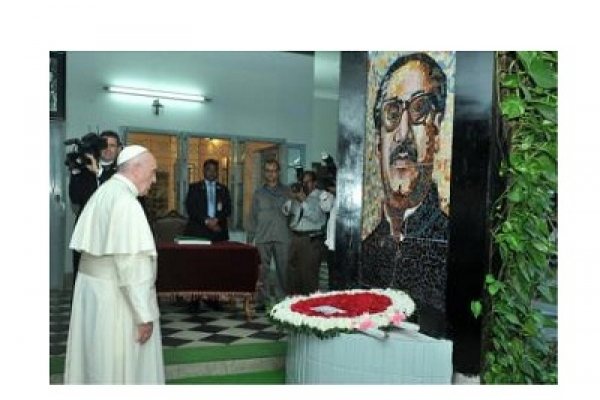 The leader of the world Catholics community Pope Francis started his three- day state visit here yesterday by paying his rich tribute to the memories of martyrs of the great liberation war and Father of the Nation Bangabandhu Sheikh Mujibur Rahman.

After receiving the red carpet reception at Hazrat Shahjalal International Airport, the pope went to the National Memorial in Savar at 4 pm.

Pope placed a wreath at the National Memorial and stood in solemn silence for some time as a mark of respect to the memories of the martyrs of the Great War of Liberation of 1971.

From Savar, the top priest went to Bangabandhu Memorial Museum at Dhanmondi 32 in the capital to pay his tribute to Father of the Nation Bangabandhu Sheikh Mujibur Rahman.

Pope Francis paid rich tribute to the founder of Bangladesh by placing wreaths at the portrait of Bangabandhu. He also signed the visitor book at the Bangabandhu Memorial Museum.

Sheikh Rehana, youngest daughter of Bangabandhu, and her son Radwan Mujib Siddiq received Pope Francis during the visit and briefed him about the history of the museum.