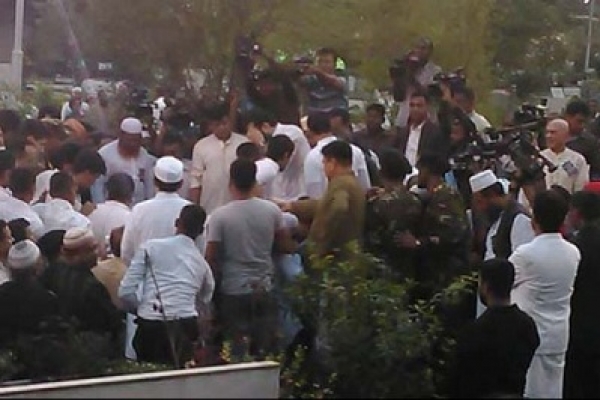 Prior to his burial, the body was taken to the Army Stadium to allow the people all strata of life to have a last glimpse of him and pay their tributes to the celebrated son of the soil.

Hundreds of people with heavy hearts joined the second namaz-e-janaza of Annisul Huq in the afternoon.
Earlier, Prime Minister Sheikh Hasina paid rich tributes to Huq as she visited the residence of the deceased in the city at about 1.45 pm, PM's Press Secretary Ihsanul Karim told BSS.

When the prime minister reached there, a heart-rending scene was created, the press secretary said, adding the family members of the deceased including his wife, son and daughters broke into tears at that time.
Sheikh Hasina joined a munajat seeking eternal peace of the departed soul. She then talked to Annisul Huq's family members exclusively and consoled them.

His first Namaz-e-Janaza was held at Regent Park Central Mosque in London after Jumma prayers on Friday.
Huq, who had been undergoing treatment at a hospital in London, breathed his last there around 4.23 pm (London time) on Thursday at the age of 65.

Huq is survived by his wife, son, two daughters and a host of friends, relatives and admirers.
He had been kept on life support since Monday as his condition deteriorated. Later, doctors found infection in his lungs.
Earlier, he was diagnosed with cerebral vasculitis at the hospital.
Doctors of the hospital removed the ventilation apparatus from his mouth at 4.23pm (London time), declaring him dead, family sources said.

Huq was born on 27 October 1952, in Kobirhat, Noakhali to Shariful Huq and Rowshan Ara Huq. He obtained his bachelor degree in Economics from the University of Chittagong.
Huq established his own business, Mohammadi Group in 1986.