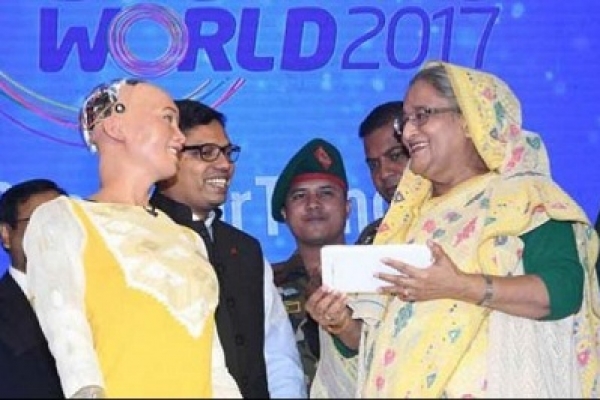 When Sophia reminded Prime Minister Sheikh Hasina that she has the same name as her granddaughter, the whole conference room full of people burst into cheer and applauded nonstop for some time.

The premier than explained the matter happily, saying name of the daughter of her only son and ICT Affairs Adviser Sajeeb Wazed Joy is also Sophia.

Sophia is a humanoid robot developed by Hong Kong-based Hanson Robotics. In October 2017, the robot became a Saudi Arabian "citizen", the first robot to receive citizenship of any country.

When Digital World expo organizers introduced Sophia to the Prime Minister, she just blew everyone's mind with her "knowledge" about the premier and her vision of Digital Bangladesh.

Prime Minister started the conversation by saying -- hello Sophia, how are you?

"Hello honorable Prime Minister, I am fine, thank you. It is such a pleasure to meet you today," Sophia, the robot, replied.

Prime Minister than asked, how do you know me?

"Well, I read and learned about you. I also know that you are the daughter of great leader and Father of the nation Bangabandhu Sheikh Mujibur Rahman. You are also called the Mother of Humanity and the one who envisioned Digital Bangladesh and also your granddaughter has the same name as mine, Sofia," the female version of the smart robot said.

"Oww, you know quite a lot about me and my vision. What do you know about Digital Bangladesh?" Prime Minister Sheikh Hasina asked.

"You would be glad to know I have learned great things about your vision of Digital Bangladesh. Digitalized Bangladesh would have more developed human resources, establish effective connectivity, leading to development in ICT industry, ensuring e-governance," Sophia said.

She goes onto saying that Digital Bangladesh was initiated in 2009 with the vision of digitizing every sector of the economy, bringing in US$ 5 billion in ICT exports and creating two million jobs.

"In the short times, we have seen numerous human resource capacity building initiatives, digitizing all the citizen services of the government ministries and organizations."

Moreover, Sophia said 28, IT parks and establishments like Bangabandhu Hi- tech City, Sheikh Hasina Software Technology Park appeared as some of the visible landmarks of ICT in Bangladesh.

"I am thrilled to be here today at Digital World 2017, which happens to be one of the biggest ICT events in South-East Asia," the robot said and humbly requested the premier to inaugurate the Digital World 2017.

"Honorable Prime Minister, I would now like to request you to inaugurate Digital World 2017, The Digital Bangladesh style," the machine woman said.

The prime minister also responded with her own style saying "Ok, let's do this Sofia. Now I open this Digital Bangladesh in Digital style".

"Sure honorable Prime Minister," Sophia said while Sheikh Hasina clicked a button on a tab inaugurating the expo.

After the interaction, the tech-friendly prime minister was visibly amused and reminded everyone with smile that it is indeed the time of her grandson and daughters.