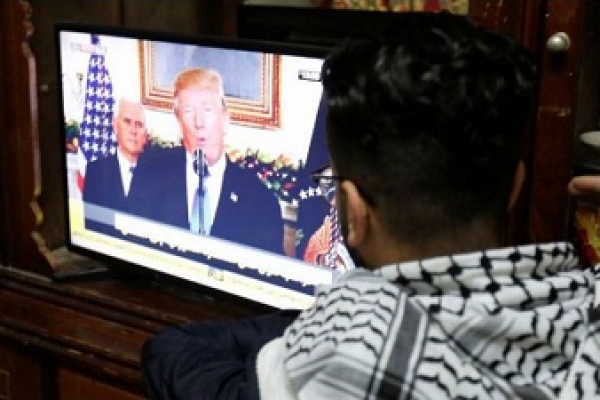 US President Donald Trump on Wednesday reversed decades of US policy and recognized Jerusalem as the capital of Israel, imperiling Middle East peace efforts and upsetting Washington’s friends and foes alike, reports Reuters.

Trump announced his administration would begin a process of moving the US embassy in Tel Aviv to Jerusalem, a step expected to take years and one that his predecessors opted not to take to avoid inflaming tensions.

The status of Jerusalem - home to sites holy to the Muslim, Jewish and Christian religions - is one of the biggest obstacles to reaching a peace agreement between Israel and the Palestinians.

Israeli Prime Minister Benjamin Netanyahu hailed Trump’s announcement as a “historic landmark,” but other close Western allies of Washington such as Britain and France were critical.

Palestinian President Mahmoud Abbas said the United States abdicated its role as a mediator in peace efforts, and Palestinian secular and Islamist factions called for a general strike and rallies on Thursday to protest.

The international community does not recognize Israeli sovereignty over the entire city, believing its status should be resolved in negotiations. No other country has its embassy in Jerusalem.

Trump’s decision fulfills a campaign promise and will please Republican conservatives and evangelicals who make up a sizeable portion of his domestic support.

“I have determined that it is time to officially recognize Jerusalem as the capital of Israel,” Trump said in a speech at the White House. “While previous presidents have made this a major campaign promise, they failed to deliver. Today, I am delivering.”

Protests broke out in areas of Jordan’s capital, Amman, inhabited by Palestinian refugees, and several hundred protesters gathered outside the US consulate in Istanbul.

With Vice Pence Mike Pence looking on, U.S. President Donald Trump signs an executive order after he announced the U.S. would Jerusalem as the capital of Israel, in the Diplomatic Reception Room of the White House in Washington, U.S., December 6, 2017. REUTERS/Kevin Lamarque

A statement from the Saudi Royal Court said the Saudi government had expressed “condemnation and deep regret” about the move.

A spokesman for British Prime Minister Theresa May called the US decision “unhelpful in terms of prospects for peace in the region.”

The United Nations Security Council is likely to meet on Friday over Trump’s decision, diplomats said on Wednesday.

Other key disputes between the two sides include the fate of Palestinian refugees and Jewish settlements built on occupied land. Trump made no mention of settlements.

He said he remained committed to the two-state solution if the parties want one. The president called on the region to take his message calmly.

Trump acted under a 1995 law that requires the United States to move its embassy to Jerusalem. His predecessors, Bill Clinton, George W. Bush and Barack Obama, consistently put off that decision.

The Jerusalem decision has raised doubts about the Trump administration’s ability to follow through on a peace effort that Trump’s son-in-law and senior adviser, Jared Kushner, has led for months aimed at reviving long-stalled negotiations. It has so far shown little in the way of progress.