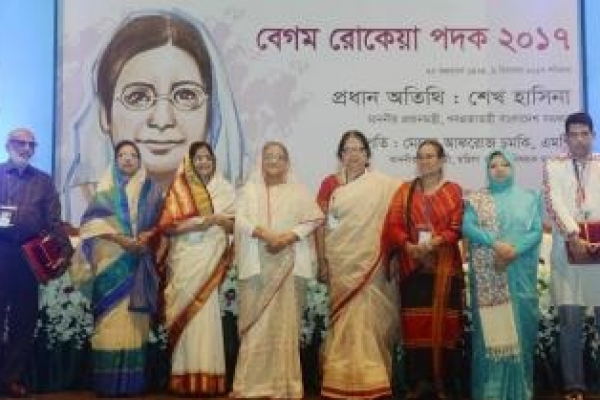 Prime Minister Sheikh Hasina today urged the country's womenfolk to keep confidence in their inherent talent and power and work together with their male counterpart to build a developed nation.

"We want every man and women to work with dedication for building a developed nation.....women should always do the work for flourishing their inherent talent and power keeping that quality in their mind," she said.

The Prime Minister said this while distributing Rokeya Padak-2017 at a function at Osmani Memorial Auditorium here.

"Women should become independent in every sphere of life. They have to move forward by their own efforts, not being dependent on others," the Prime Minister said, adding 'women must beat every barrier on their own to go ahead."

Urging every woman to stand beside the downtrodden people, the Prime Minister said 'It's our duty to stand by the poor and physically challenged people to build up their confidence and assist them to come out of the disgraceful situation.

"We will be able to change the society if we work together," She also said.

Secretary of the ministry Nasima Begum delivered the welcome address. On behalf of the recipients Mazeda Showkat Ali spoke at the function.

Last year the Prime Minister announced giving Rokeya Padak to more women from this year instead of two saying many women, who are silently working in rural areas with very limited facilities for women's awakening and development, would be given the award. So far, 46 women were adorned with the prestigious Begum Rokeya Award that was introduced in 1995.

The Premier said her government is trying to impart education and necessary training to the country's women to make them independent financially for their social empowerment.

"Women have to stand on their own feet to attain their emancipation. So the government has been giving emphasis on providing multiple supports to help them attain economic freedom so that they can contribute to their family and country," she added.


Paying rich tributes to Begum Rokeya, Prime Minister Sheikh Hasina said Begum Rokeya, a beacon of women renaissance and an institution of female education, wanted to build a society in where every man and women will live with dignity.

Her ideology, writings, strong mentality and working spirit still inspire us, Sheikh Hasina said, adding the benefits of the independence have to reach every house to turn in reality of Begum Rokeya's dream.

The government introduced the award in 1995 after the name of Begum Rokeya, a pioneer of women's emancipation movement in the undivided Bengal, also a leading feminist writer and social worker during the early 20th century and mostly famous for her efforts for achieving gender equality and female education.

Recalling the contributing and sacrifices of women to the country's liberation war, the Prime Minister said after independence, Father of the Nation Bangabandhu Sheikh Mujibur Rahman and Bangamata Fazilatunnesa Mujib with their parental affections had taken massive steps for political, social and economic development of women with rehabilitation and treatment of the mothers and sisters, who suffered immense brutality of the then Pakistani force and their local collaborators.

Bangabandhu had established a board for rehabilitation of the women who were oppressed during the War of Liberation. Bangabandhu and his wife stood beside the demoralized women and arranged their marriage," Sheikh Hasina, eldest daughter of Bangabandhu, said.

The Prime Minister said Bangabandhu first unveiled the road to free education for women. He guaranteed the rights of women in the Constitution and took steps for their free education up to the secondary level.

Bangabandhu introduced quota for female in civil service to make them financially independent. Bangabandhu also introduced the provision of reserve seats for women aimed at building up woman leadership, she also said.

Bangabandhu not only gave importance on the rights of women, but also their freedom in the society and economic liberty, Sheikh Hasina said, adding that her government inherited many things and inspiration from Father of the Nation Bangabandhu Sheikh Mujibur Rahman in this field.

The Premier said the government has undertaken special programme in the upazila and district levels for making women aware about their rights. Women representation at every level of the local government bodies has strengthened their social position at the grassroots, she said. "Women can now work in every sector of the country including administration, judiciary, defense, sports and UN peacekeeping missions. However the success didn't come overnight... we have to overcome many obstacles to come to this stage," she added.

Congratulating the recipients of the Rokeya Padak, 2017 the Prime Minister said "on this auspicious day, let us take the oath to materialize the dream of Bangabandhu and Begum Rokeya to make Bangladesh where every man and women would have equal scope to flourish their talent and contribute to the family and society."

"Joint efforts of men and women can build a golden Bangladesh as we dream for making it a middle-income country by 2021 and a development one by 2041 imbued with the spirit of the War of Liberation," she added.