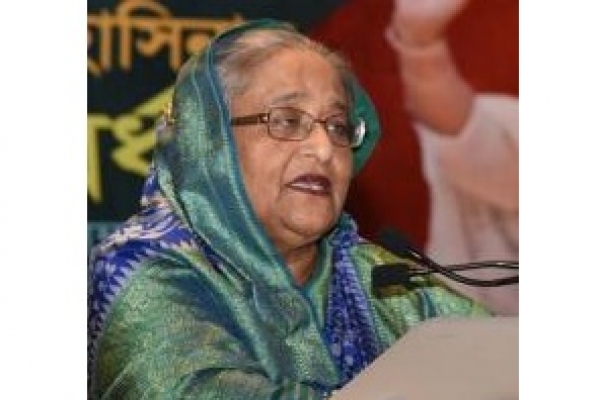 Prime Minister Sheikh Hasina today urged the French companies to set up a Special Economic Zone (SEZ) in Bangladesh saying there is an immense scope for more French investment in various sectors.

"We're setting up 100 'Special Economic Zones' across the country to industrialize Bangladesh in an inclusive manner. Besides the traditional areas of trade, I feel that there is a scope for further French investment in Bangladesh's urban infrastructure, energy and the blue economy sectors," she said in a breakfast meeting with top French business leaders.

Movement of the Enterprises of France (MEDEF), the largest employer federation in France, organized the meeting at the Hotel Intercontinental Paris Le Grand here this morning.

Sheikh Hasina said France needs to invest to sustain its growth while Bangladesh needs investment to expedite its growth.

"You need competitive sourcing option while we look for diversifying our export destination. This offers a perfect combination for a win-win partnership for both our countries," she said.

The prime minister said that marking the 45th anniversary of the establishment of diplomatic relations between Bangladesh and France this year, it's an opportune time to reflect on potential new areas of cooperation.

Sheikh Hasina said Bangladesh is a land of opportunities and potentials, having one of the friendliest foreign investment and trade regimes in the region.

Despite many challenges, she said, Bangladesh has achieved 7.28% GDP last year and this powerful momentum has created huge opportunities.


France is now Bangladesh's fifth largest export destination, she said adding that in continuation of our ever-expanding bilateral economic relations, Thales Alenia Space, a Franco-Italian aerospace manufacturer, was awarded the contract in 2015 to build and launch the Bangabandhu Satellite, first of its kind for Bangladesh.

"We're happy that all preparations are now underway to launch it in March 2018," the prime minister said.

Sheikh Hasina also expressed her happiness to note that French company Technip is currently working towards establishing the second phase of Eastern Refinery in Bangladesh.

French FDI in Bangladesh was USD 14.64 million in 2016-17, she said adding that "We strongly encourage French companies to come up with investments, including with concessional financing options."

Sheikh Hasina said Bangladesh is a huge market of 160 million people located between south and southeast Asia. Its geographical location has made Bangladesh the natural gateway between the ASEAN and SAARC regions, she added.

Pointing out Bangladesh strides to improve regional connectivity, the prime minister said Bangladesh is investing heavily in this sector.

"So the investment in Bangladesh will give you access to the market of the entire region, which is a market of nearly two billion people," she said.

The premier said PricewaterhouseCoopers (PwC) earlier this year has identified Bangladesh as one of the three fastest growing economies globally over the next three decades. "The strength of Bangladesh's economy is now globally recognized, she said.

Turning to her yesterday's fruitful meeting with President Macron, the prime minister said they share the vision to expand bilateral relations and cooperation between our two countries.

"We're also in discussion with French authorities to support our efforts in various sectors," she said.

Sheikh Hasina said her participation in this One Planet Summit is reiteration of Bangladesh's support to the Paris Climate Agreement (COP-21). Bangladesh appreciates France's leadership in taking forward the climate change consensus, she said.