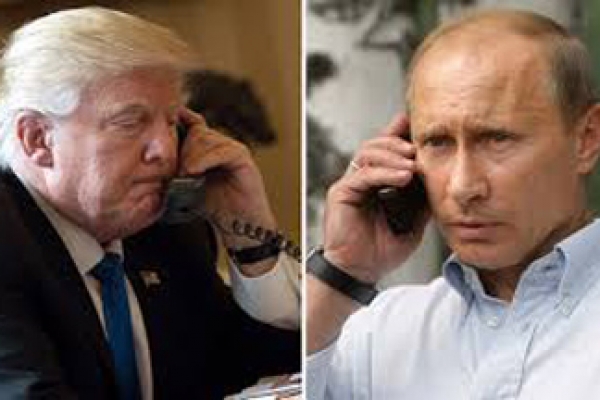 Vladimir Putin and Donald Trump discussed the crisis over North Korea's nuclear program in a phone call Thursday, in which the US president took the unusual step of thanking his Russian counterpart for praising America's economy.

The two heads of state discussed "the situation in several crisis zones, with a focus on solving the nuclear issue on the Korean peninsula," the Kremlin said in a statement, without elaborating.

The White House said the two "discussed working together to resolve the very dangerous situation in North Korea."

But Trump's thanks to Putin took top billing in the US statement.

Earlier in the day, Putin told his press conference: "Look at how the markets are reacting, they are growing. This shows confidence in the American economy. With all due respect to (Trump's) opponents, these are objective facts."

The pair have lavished praise on each other in the past, with commentators describing their cozy relationship as a "bromance."

Special counsel Robert Mueller is currently investigating possible collusion between the Trump campaign and Moscow to tilt the White House race in his favor.

Washington this week said it was ready to talk to North Korea -- which has launched several intercontinental ballistic missiles in recent months -- "without preconditions."

US Secretary of State Rex Tillerson said that while the Trump administration was still determined to force Pyongyang to abandon its nuclear arsenal, it was willing to "have the first meeting without preconditions."

Putin, in his annual press conference with hundreds of journalists in Moscow, welcomed the United States' "awareness of reality" in the crisis.

However, he called on all sides to "stop aggravating the situation" and said Moscow did not recognize North Korea's status as a nuclear power.