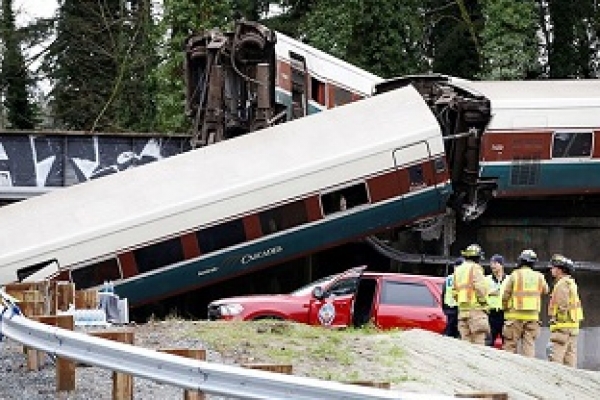 At least six people were killed and 22 others were hurt after an Amtrak passenger train derailed on Monday on its inaugural trip on a new service route near Dupont, Washington.
According to CNN, 13 of the total 14 cars spilled off an overpass.

Ed Troyer, spokesman for the Pierce County Sheriff's Office and the Washington State Patrol, the deaths "are all contained to the train and the incident is "pretty horrific."

Troyer said there were "multiple fatalities" but he could not provide a precise number, CNN reported.

MultiCare Health, a non-profit network of hospitals and clinics, said 22 people were taken to three hospitals for treatment, Xinhua reported.

Several motorists were struck by the fallen train cars and also suffered injuries, but there were no fatalities among people in those vehicles, the sheriff's office said.

At least 77 people were taken to hospitals, including victims who were able to walk off the train, the authorities were quoted as saying.

A passenger on the train says his car derailed and everyone "catapulted" into the seat in front of them.

An Amtrak spokesperson said there were about 78 passengers and five crew members on board the train when the accident happened.

Amtrak president said the company was 'deeply saddened by all that has happened.

Washington State Governor Jay Inslee declared a state of emergency in the aftermath of the accident.