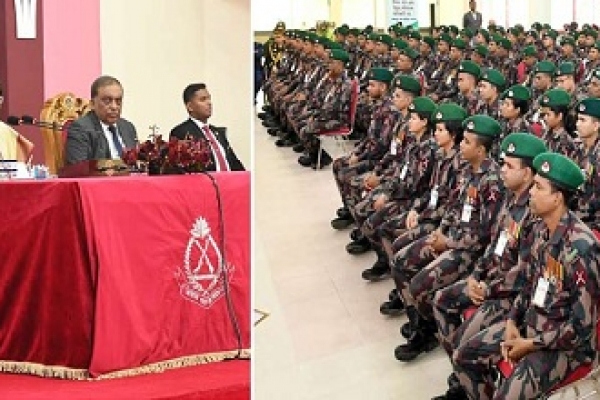 Prime Minister Sheikh Hasina today urged the members of the Border Guard Bangladesh (BGB) to nurture the spirit of mutual confidence and respect as well as discipline and sympathy to each others to make the force stronger.

"Mutual confidence and respect as well as discipline at all level and sympathy to each others would make strong the fibres of bonds in the force. So, everybody should obey the force's rules and discipline and work for country's welfare," she said.

The Prime Minister said this while addressing the BGB Parade marking the Border Guard Bangladesh (BGB) Day-2017 at BGB headquarters at Pilkhana here.

Sheikh Hasina said loyalty and sincerity of BGB members are beyond question. People have immense confidence in the ability of the force to protect the frontier, maintain law and order and overcome natural or social disasters.

Giving her government's complete assurance to provide all support to the development of the force the Prime Minister said BGB is a glorious organization as far as we consider their sacrifice in the Liberation War.

The 222-year old force was raised up in 1795 as 'Ramgarh Local Battalion'. In course of time and due to geographical changes the force has functioned in different names and now the force, namely BGB, is playing strong role in protecting the border.

Sheikh Hasina said responding to the call of the Father of the Nation Bangabandhu Sheikh Mujibur Rahman, members of the force waged resistance against Pakistani soldiers in the very first hour of the Liberation War in 1971. They transmitted the proclamation of the Independence across the remote areas of the country through wireless and on that charge Pakistani army killed the then EPR Subedar Major Showkat Ali and his four associates.

Sheikh Hasina said around 12 thousand Bangalee soldier of the EPR took part in the Liberation War, out of them 817 soldiers embraced martyrdom.

Two Birshrestras of EPR- Lance Nayek Nur Mohammad Sheikh and Lance Nayek Munsi Abdur Rouf- are the pride of the nation. Eight Bir Uttam and 32 Bir Bikram and 77 Bir Pratik have glorified the history of the BGB through showing their valor in the Liberation War, she said.

The prime minister recalled that Father of the Nation Bangabandhu Sheikh Mujibur Rahman had taken salute in the parade of the first batch of Bangladesh Rifles (BDR) on January 8, 1973. Bangabandhu had taken many pragmatic steps to make the force befitting to the age.

Pointing out the BDR mutiny in February 2009 the Prime Minister said the unexpected incident happened within one month and 19 days of formation of the Awami League government.

The government clamped down the rebellion very quickly, reconstituting the force under a new law, she said paying rich tributes to 57 smart military officers who laid down their lives in the mutiny.

Praising the role of BGB in curbing violent activities ahead of and after the national election in 2014 Sheikh Hasina said members of the BGB have showed their utmost responsibility in resisting violence, terrorist activities and protecting public lives and property.

Recent activities of the BGB to dealing with the Rohingya problem, mitigating tension on border with Myanmar, ensuring security of the Buddha villages in Ramu, tackling unstable situation in the CHT and in the rehabilitation of the people of the enclaves have brightened the image and dignity of the force, she said.

On her arrival at BGB headquarters Home Minister Asaduzzaman Khan, Secretary of the Public Security Division Md. Mostafa Kamal and Director General of BGB Major General Abul Hossain received the prime minister. She was given a state salute amid playing of the national anthem.

On the occasion, an attractive parade was arranged at Bir Uttam Anwar Hossain Parade Ground at BGB headquarters. The prime minister reviewed the parade and took salute. Deputy Director General of the BGB Md. Zulfiker Ali was the parade commander.

She also enjoyed a combined display namely 'Uthsa theke Mohona' performed by BGB members and students of the educational institutions of the BGB.

Mentioning the steps taken by her government for capacity building of the BGB members, for their housing and overall development, Sheikh Hasina said steps were taken for modernization of the force according to the BGB Act, 2010.

She said the government has undertaken a plan to construct a total of 3,167 km ring road across the borders with India and Myanmar. A new region and 25 additional platoons of BGB have been created on Myanmar border due to current tension.

Prime Minister Sheikh Hasina expressed her firm optimism that members of the BGB would discharge their duties with utmost honesty and patriotism to uphold the goodwill and dignity of the border force and earn public confidence.

Referring to the successful implementation of LBA with India, the Prime Minister said BGB had a very strong role in implementing the agreement and exchange of the enclaves.

Sheikh Hasina said female soldiers have been recruited in the BGB who are plying very praiseworthy role in the BGB.