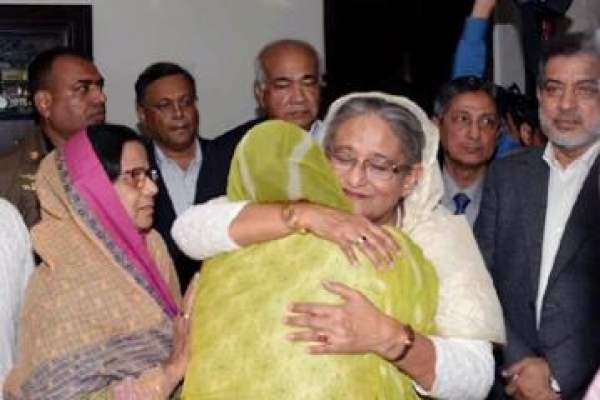 The prime minister, who came here today to join the President Parade-2017 marking the passing out of the Midshipmen-2015 and the Direct Entry Officers (DEO) 2017/B batches of Bangladesh Naval Academy (BNA), went to the residence of Chowdhury at Chashma Hill this afternoon.

Sheikh Hasina stayed there for some time and consoled the family members of Chowdhury, who died on December 15. She also prayed for eternal peace of the departed soul.

Chowdhury, an organizer of the liberation war and a former city mayor, breathed his last at city's Max Hospital on December 15 at the age of 74.

He had been suffering from heart and kidney complications for a long time.

The prime minister also gave financial assistance to the family members of 10 victims who were killed in a stampede at the Qulkhwani of Mohiuddin Chowdhury on December 18.

She handed over the cheques for Taka five lakh to each family of the victims at the residence of Chowdhury. At that time, Sheikh Hasina embraced and consoled them.

Housing and Public Works Minister Engineer Mosharraf Hossain was present on the occasion, among others.