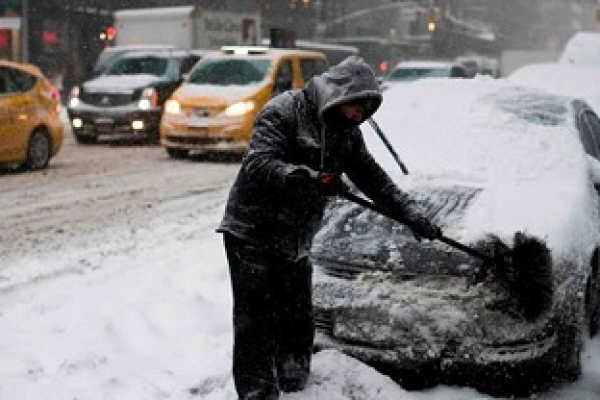 A giant winter "bomb cyclone" walloped the US East Coast on Thursday with heavy snow and freezing cold that made for treacherous travel conditions and bone-chilling misery.

Four people were reported killed in the southeastern states of North and South Carolina, where icy roads sent vehicles skittering.

A cold wave gripping a large section of the United States had already been blamed for a dozen earlier deaths.

Thousands of flights were cancelled and schools closed in many localities as snow piled up and blizzard conditions began taking hold in the northeast.

Temperatures were so low in northern New York that Niagara Falls -- the giant waterfalls straddling the US-Canadian border -- froze.

Snowfall eased by nightfall but temperatures were set to plunge to 8 Fahrenheit (minus 13 Celsius) and remain sub-freezing all weekend.

Weather forecasters dubbed the event a "bomb cyclone," their nickname for a phenomenon known as "bombogenesis," in which a weather system experiences a sharp drop in atmospheric pressure and intensifies rapidly, unleashing hurricane-force winds.

Americans along the East Coast faced potential power outages in bitterly cold sub-freezing temperatures. About 30,000 customers in Virginia and North Carolina were deprived of electricity according to CNN.

Some 3,000 customers were hit in New York and about 10,000 in Boston, although service was partly restored at the end of the day.

In coastal Boston, the storm was accompanied by giant waves that led to what Massachusetts Governor Charlie Baker described as "historic flooding" that inundated the city´s eastern streets as well as coastal areas of the state.

New York mobilized additional resources by declaring a state of emergency, while a Singapore Airlines A380 was forced to land at the Stewart Airport upstate after being diverted from the city´s main JFK International.