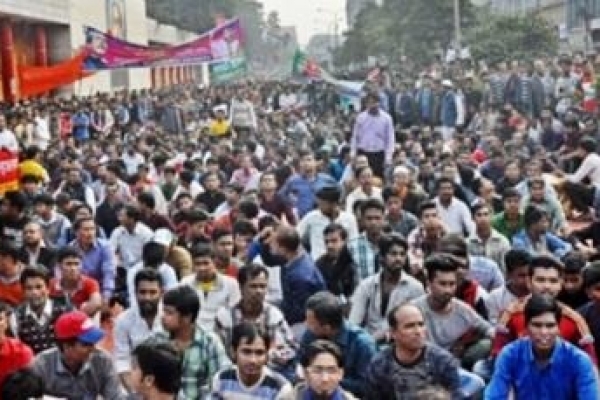 The Victory Day for Democracy was observed today across the country through different programmes marking the January 5, 2014 polls as the national election helped continue the democratic and constitutional process.

Awami League (AL), the party which successfully led the nation's War of Liberation, won the 10th Jatiya Sangsad elections on that day, defeating all conspiracies and overcoming all barriers, and formed the government for the third time.

AL and other pro-liberation political parties and social organizations chalked out elaborate programmes to observe the day in a befitting manner across the country. The programmes included holding rallies and processions at district, city and upazila levels.

Addressing the rally at Bangabandhu Avenue, Quader said it would be second suicidal decision for BNP if the party does not take part in the next election.

He said the next elation will not wait for anyone as like as time and tide wait for none. If BNP misses the election, their political future will also be bleak, he observed.

Another rally was organised at Banani Puja ground with Dhaka North City unit of AL President AKM Rahmat Ullah in the chair.

Awami League leaders say the January 5 election is a milestone to the progress of the country as it eased the way for completing the trial of crimes against humanity, and different mega development projects like Padma Bridge, Metro rail, Rooppur Nuclear Power Plant, Rampal Power Plant, Karnafully tunnel, Payra Seaport, Sonadia deep seaport, Railway project from Dohajari to Cox's Bazar via Ramu and from Ramu to Gumdum, and 100 special economic zones.

Earlier, on June 30 in 2011, the 15th Amendment Bill was passed in the Jatiya Sangsad repealing the provision for caretaker of government. The then main opposition BNP and its allies launched a movement demanding that the provision of the caretaker government during the polls be reinstated.

Centring the January 5 national polls of 2014, the BNP-Jamaat combine created unprecedented anarchy throughout the country unleashing vandalism, destruction, killing, subversive acts in the name of non-stop siege and hartal programmes.

In a bid to thwart the national polls, the BNP-Jamaat alliance with anti-liberation forces created panic by killing people, setting ablaze buses-trains, derailing trains by removing fish plates while its armed cadres set ablaze 111 polling centres, chopped off a polling officer and few other poll officials, snatched away election materials, blasted petrol bombs a day before the polls.

But braving intimidation and threat on their lives, some 42 percent people exercised their franchise in the polls to the 10th Jatiya Sangsad for the sake of continuation of the constitutional democratic practice in the country.

The BNP-Jamaat combine wanted to jeopardise the national polls unleashing terrorism, intimidation and widespread anarchy ostensibly for installing another 1/11 like undemocratic government.

Facing a stiff challenge and widespread anarchy, the government of Prime Minister Sheikh Hasina restored peace with improvement of law and order across the country through holding of the national polls that cleared the way for continuation of democracy.