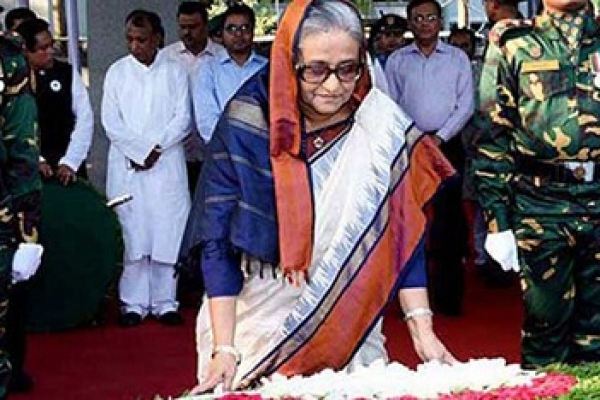 Prime Minister Sheikh Hasina has paid rich tributes to Father of the Nation Bangabandhu Sheikh Mujibur Rahman on the occasion of the Homecoming Day of the great leader.

The premier paid the homage by placing wreaths at the portrait of the Father of the Nation in front of Bangabandhu Memorial Museum at Dhanmondi in the city on Wednesday morning.

After laying the wreaths, the prime minister stood in solemn silence for sometime as a mark of profound respect to the memory of Bangabandhu, the architect of independence.

Flanked by central leaders of the party, Sheikh Hasina, also the president of Bangladesh Awami League, placed another wreath at the portrait of Bangabandhu on behalf of her party.

On this day in 1972, Bangabandhu Sheikh Mujibur Rahman returned to independent Bangladesh after nine and a half months of captivity in a Pakistan jail.

Since then, the nation is observing the day as the Homecoming Day of Bangabandhu.