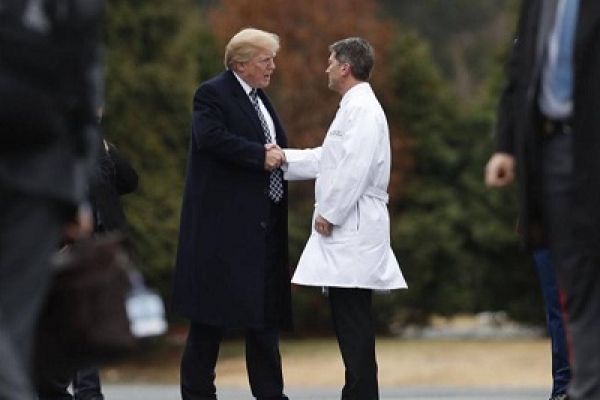 In a brief statement, Jackson said, "The President's physical exam today at Walter Reed National Military Medical Center went exceptionally well. The President is in excellent health and I look forward to briefing some of the details on Tuesday."

Doctors and nurses poked and prodded Trump on Friday during his first known medical checkup since taking office, the results of which will provide the most accurate gauge yet of how a year being commander in chief has worn on the presidential frame.

Will they show he's gained weight since his last medical report, which noted he tipped the scales at 236 pounds? Or will his cholesterol have changed from the normal readings reported in 2016 after a steady diet of red meat, ice cream and Diet Coke?

Those questions will likely be answered by next week, when the White House says the results of the exam will be released. Trump, 71, will have the final say on what readings are made public. And Jackson will present some details of his examination from the briefing room, reports CNN.

If Trump had any patient's apprehension going into his exam -- which he flew to aboard his Marine One helicopter -- he didn't let on.

"I think it's going to go very well. I'll be very surprised if it doesn't," he had said Thursday when asked by a reporter about his expectations for the doctor's appointment.